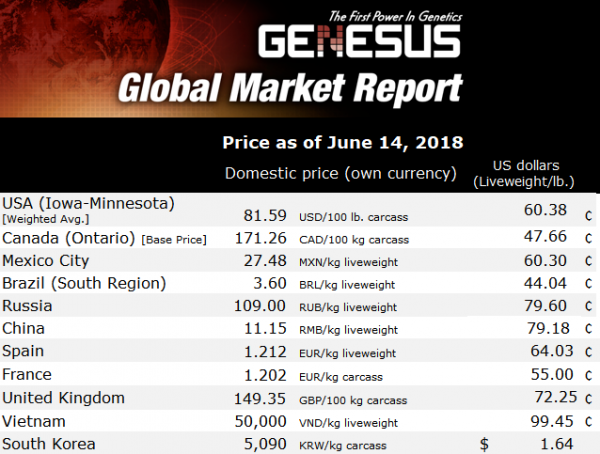 In response to U.S. duties on imports of steel and aluminum, Mexico has imposed a 10% retaliatory duty on all chilled and frozen pork cuts imported from the U.S., as well as a 15% duty on sausages and a 20% duty on some prepared hams. The 10% duty rate on pork cuts will be in effect until July 5, at which point the rate is set to increase to 20%.

Mexico’s Ministry of Economy also opened a 350,000 metric ton duty-free quota that is aimed at attracting pork cuts from other sources, including the European Union. (Canada and Chile also have pork plants eligible to ship to Mexico, but these products already enter duty-free under NAFTA and the Chile-Mexico Free Trade Agreement). Mexico and Canada consider the recent steel and aluminum tariffs a separate trade issue that will be addressed outside of NAFTA. Both Canada and Mexico say NAFTA has been very beneficial for the agricultural sectors of all three countries.

The U.S. pork industry is concerned what impact last week announced tariffs on imported steel and aluminum will have on pork exports, especially to Mexico, the number one market for American-raised pork. About 22 percent of U.S. pork is exported, and Mexico is the largest buyer by volume. The country has been a key importer of hams at a time of record U.S. production, and has helped support the value of hogs. Shares of pork processor Tyson Food Inc. fell as much as 4.5 percent in New York last Thursday, while Hormel Foods Corp. declined as much as 3.7 percent. Hog futures traded in Chicago dropped as much as 3.5 percent.

However last week talking with Mexican Pork Producers at the 30th World Pork Expo in Des Moines, IA, they were confident that Mexico wouldn’t stop buying US pork in spite of the recent tariffs. They told us “Mexico has a 1 million tons deficit/year. United States provides most of this pork. It’s next door commodity, easy to ship and good quality”.

“The U.S. Meat Export Federation, USMEF, will continue to emphasize the quality and consistency of U.S. pork to red meat customers in Mexico and make every effort to help U.S. suppliers retain their business. But make no mistake about it, the U.S. industry is going to have to fend off competitors who suddenly have a significant tariff rate advantage and see a clear opening into the Mexican market.” Says USMEF President and CEO Dan Halstrom.