Canada – Party’s over, now what?

Two months ago Bob Hunsberger, Wallenstein Farm Supply, projected profits for the next 12 months at $10.35 per pig and producer profitability levels $13.29 per pig average producer and $34.30 per pig excellent production at the time. I asked then if we were out of the woods or just whistling pass the graveyard?

The table below suggests the latter. Projected profits for the next 12 months now stand at ($10.96) per pig average and producer profitability levels this week ($19.25) per pig average production and $1.51 per pig excellent production. A considerable change of fortunes. However appreciate predicting the (market) future can be “a mug’s game” as a wise man said the market goes up or down seems we’re ultimately always surprised. That said it does appear as we like to say in Canada “we have winter, then several months of tough sledding.” Question becomes how much, for how long? 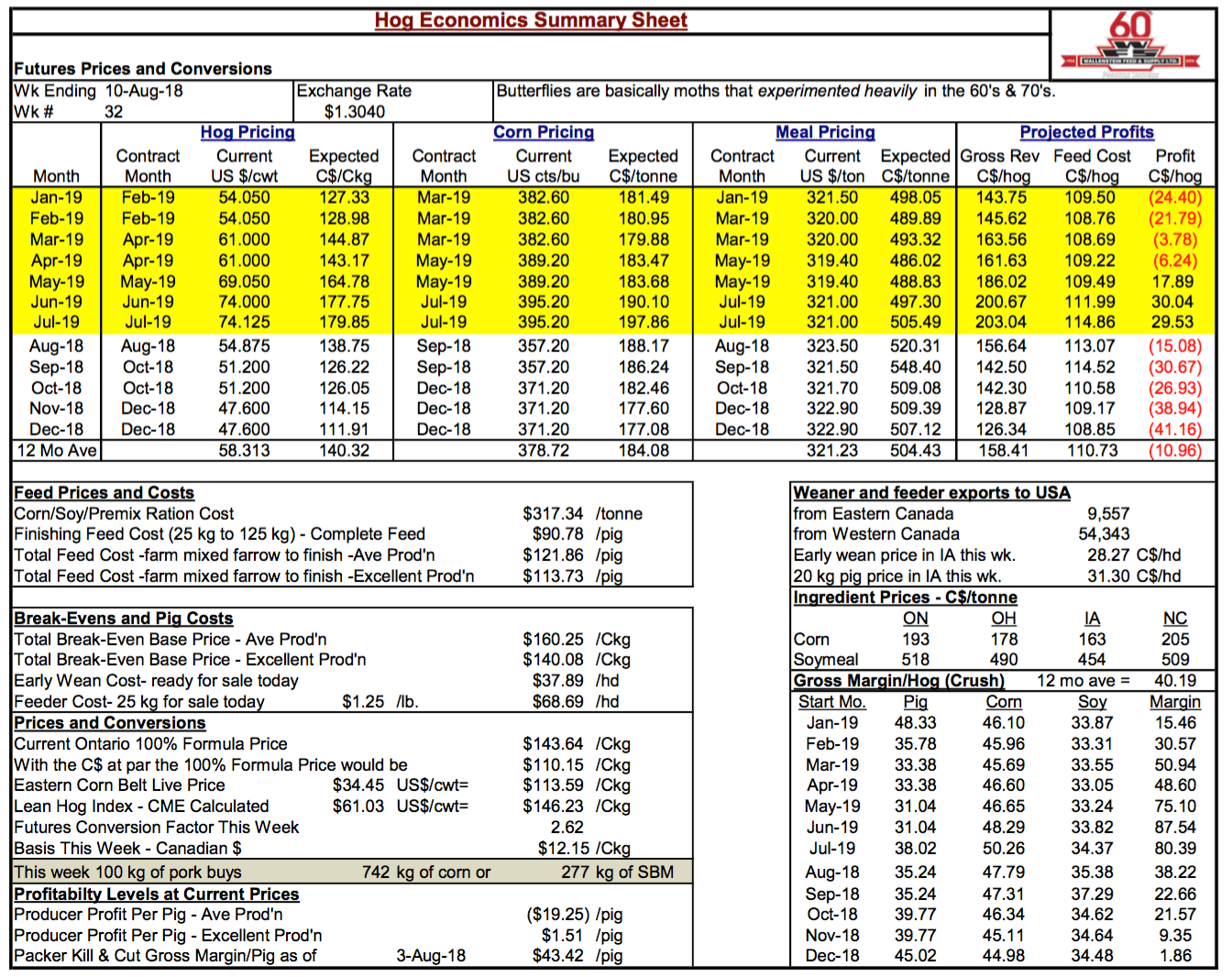 More importantly a friend and great commodity trader Charlie McVean once told me “when we get slaughtered, we do a post mortem”.  Perhaps for the Ontario pork industry a post mortem ahead of the slaughter would be worthwhile.

In the last number of years we’ve seen apparent merit in the processing end of this industry. Packers have enjoyed some unheard of margins in last few years. They also seemed to have been able to do this while the producer was also making decent money. This runs counter to how this industry was thought to work. The conventional wisdom was the packer made money and the producer didn’t. Then the producer made money and the packer didn’t. This alternated back and forth but seemed to usually balance out. To have both sides make money (let alone significant money) at the same time was not thought to be possible. The last few years appear to have broken that maxim and caused various arrangements of packers integrating backward or producers integrating forward or some variation of both.

The prime example in the US is Triumph/Seaboard. I know nothing of its inner workings but the fact that they have just completed their second very large packing plant in Sioux City IA (this as full partners) and pushing on to a second shift would make one inclined to believe the model is working. Here in Ontario 3Ps (Progressive Pork Producers) has what appears to be a similar model in their producer ownership of Conestoga Meats (presently 35,000 hog/week packing plant). However they have no alignment like Seaboard with clear skills in marketing meat domestically and internationally, also with brands. This was in 3Ps original plan to align with Thornapple Valley in Detroit. Unfortunately they went broke before that could ever be consummated. There were then some overtures made to Quality Meats in Toronto, which were rebuffed. Quality Meats has since gone broke. Perhaps lessons in both instances? In any event producers once they had the bit in their mouth forged ahead ending with Conestoga Meats, which is now working on expanding to be able to do 50,000 hogs per week (single shift).

They seem to have climbed the learning curve of marketing meat domestically and internationally but I expect the tuition fee in the school of hard knocks has been steep. The meat business appears to be a big boys club with multi-billion dollar players, Tyson (American), JBS Swift (Brazilian), Smithfield (Chinese) etc. Can producers beyond a niche, play in this yard long term? What about an Canadian alignment similar to Triumph/Seaboard? Was part of original plan does it still have merit?
In the meantime other participants in the Ontario industry would like to see someone build a green field, state of the art packing plant in Ontario that could ultimately be doubled shifted. I don’t think anyone is opposed to that being a wonderful thing. However as a salesman that can rationalize a lot of things, I can’t see why American, Chinese, South Asian, whoever would feel compelled to make that kind of investment. I believe this may require a homegrown solution. Conestoga appears to be part of the way there. Double shifted is it more bullet proof? Many feel this is what the Ontario industry needs. It certainly doesn’t need two large double shifted plants and attempting to do two may doom both to ultimate failure.

The Ontario industry had 430,000 sows at its peak some ten plus years ago. It has the producer base with the desire and ability to be that again. Also the Ontario model of land to corn to hogs to manure and back around I s extremely sustainable and resilient. Some legislative changes to help with labour and to uncouple land ownership from hog buildings could prove to be helpful.

All this requires leadership and will and is clearly hard with discussion, compromise and getting along. However this industry has demonstrated this type of foresight in the past. They need to now consider a “bigger tent” and inviting all participants inside, because looks like a storm may be coming.