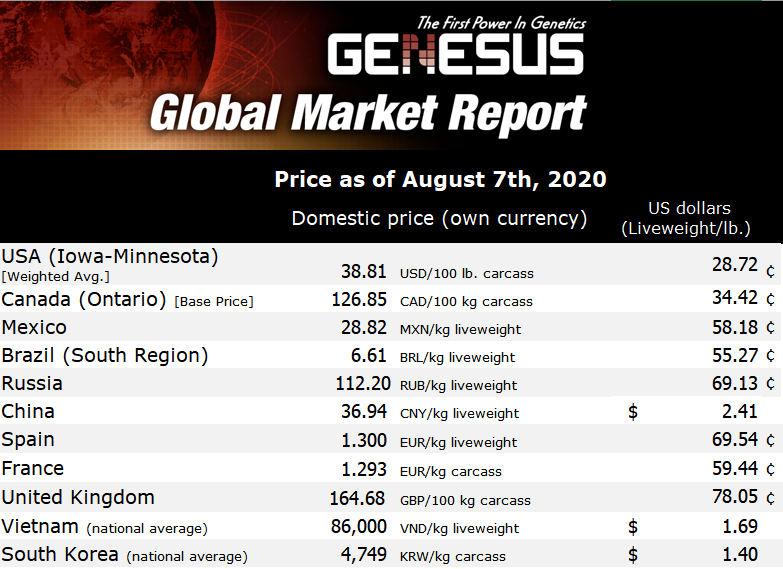 In my last two commentaries, I’ve suggested the industry was a mess, maybe even a hot mess. What can I say now other than we’ve either got used to it or have become numb?

Carrying on from my table last commentary of Ontario Pork’s weekly reporting of the average, low and high total return to producers per 100 kilograms dressed weight.

You can see the spread now extends to over $100 per hog. Resulting in some producers maybe thinking they should expand to producers bleeding to death by a thousand pin pricks, across the road from each other. I would question whether the spread has ever been this wide. All this as shown above with 25% of the global sow herd gone, primarily from ASF causing prices pretty much everywhere other than North American to be at historical highs.

So, if this isn’t broken, I don’t know what is. Andrew Heck, Editor of Canadian Hog Journal does an excellent job in their Summer 2020 magazine of highlighting some of the issues in his article “Producer-packer tensions threaten viability.”

In mid-May the pork producer organizations in B.C. Alberta, Saskatchewan and Manitoba issued a joint invitation to executives from Maple leaf Foods, Olymel and Donald’s Fine Foods to have an open frank discussion on the state of the industry, and work to solutions that generate shared value for producers and processors. Part of the written invitation reads:

“As a result of our flawed value sharing system, pig producers in Canada have needed to rely on the goodwill of the federal and provincial governments and taxpayer dollars to support producers’ very survival.” It continues, “For too long, the producer and packer have been at odds with each other, and it has created an unmanageable and antagonistic relationship that is weakening the industry and the brand in the global marketplace. This approach must come to an end.”

I think most producers would agree with the synopsis if taking exception to the extent of government goodwill helping them. However, although a commendable effort, in a capitalist system with packers making previously unimaginable margins it will be challenging for them to see a lot wrong with this present picture. Even when some in their midst understand killing your supplier is ultimately bad for business. Similarly, as many producers are fighting for survival difficult to take “the long view”. I believe the saying is “when you’re up to your ass in alligators, it’s hard to remember your original intention was to drain the swamp.”

But now would seem the very time for vision for the industry. In the past, the one solution to this conundrum between the packer and producer has been for the packer to integrate down. Although more extensive in the US in percentage terms perhaps not that much different in Canada.

Such that would be difficult to tell which tail is wagging the dog.

An alternate solution is for the producer to integrate up. As with Conestoga Meats/ Progressive Pork Producers (3P) here in Ontario. Right now, they appear “the smartest guys in the room” as they share in the value of the hog with enviable margins compared to many producers in the province. However, this model requires overlooking the better part of a twenty-dollar bill they put on the back of every hog for ten plus years

Which is the better model? Don’t know that there’s any convincing evidence that packers make better hog producers than hog producers. Anymore than producers make better pork packers than packers. Most economic theory would suggest the greatest prosperity comes from all the players sticking to what they’re best at. That being said the old way of producers and packers taking turns making and losing money no longer seems sustainable. Particularly when the playing field appears tilted against producers perhaps permanently.

Pork producers have proven themselves to be extremely resilient and innovative amongst agriculture producers. Appears time to think BIG!

Again Bob Hunsberger, Wallenstein Feeds, Hog Economics Summary Sheet shows little in the way of encouragement or change from eight weeks ago, profitability going from per pig with average production loss of (-$37.90) to loss per pig with an average production of (-$30.23). A $7.67 per pig increase in revenues that for some at least only says “you’re not bleeding as fast”. Then with the next twelve-month projection moving from (-$6.52) to (-$5.11) – arguably moving in the right direction but hardly comforting. Seems time for a better mousetrap.