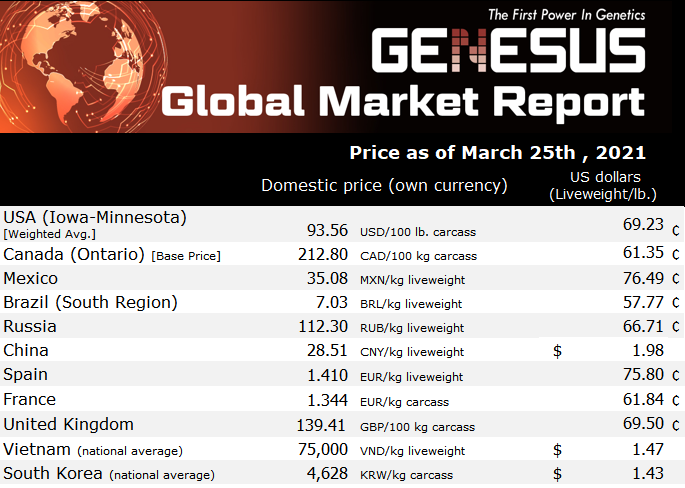 Last commentary I said that we had no relief and we were in a tight race, although pork was rising, it was being outrun by grains. Squeezing margins from rising feed costs.

Here is where we were at on January 22, 2021, from Bob Hunsberger – Wallenstein Feeds, Hog Economics Summary Sheet showed profitability (loss) per pig with average production at (-$39.27). Then with the next twelve-month projection again at a loss of (-$4.24). Also said if in fact we’re in a “commodity supercycle” we need it to come stronger to pork because right now grains are outrunning it.

Well apparently, wishes are sometimes granted. Hogs have finally found their mojo and kicked into overdrive. Here eight weeks later, Bob Hunsberger – Wallenstein Feeds, Hog Economics Summary Sheet shows profitability per pig with average production at $26.34. An incredible reversal of fortunes of $65.61. I have suggested before you have to like rollercoasters in this business. This just added definition to that statement. Then the next twelve-month projection has moved from a loss of (-$4.24) to a profit of $27.68. Underscores the old-timer maxim “I never made money feeding cheap corn to cheap hogs, however expensive corn to expensive hogs…”

Bert wrote this mid-March. So far, he’s nailed it. Most producers will think about time for the promise of China and ASF to do them some good. However, as Canada long knows as an export nation with over 70% of our pork production going to exports, they can be fickle and subject to no end of geopolitical forces. Therefore, probably worth considering some risk management to take some money off the table. As another maxim of the old-timers “bulls make money, bears make money, but pigs get slaughtered.

In past commentaries I have noted how many Ontario pork producer’s integrated model of land-to-corn-to-hogs-to-manure and back around is a very sustainable model. Also the equity in land provides considerable ballast to their “rollercoaster” pork business. Here is a condensed article by Matt McIntosh, Contributor to FarmOntario on how that has been working this past year.

below article by Matt McIntosh, Contributor to FarmOntario

The pandemic might have slowed the economy in 2020, but it didn’t slow the growth in land values. In fact, the ongoing global viral calamity is, in its own way, another factor contributing to per-acre purchase costs. In his annual “Southwestern Ontario Land Values” report, Ryan Parker, partner with London area real estate appraiser Valco, said the farm community managed to find ways of buying and selling farmland throughout 2020.

2020 farmland values, by the numbers:

As described in the report, 2020 continued a long-standing trend of historically low-interest rates, with the pandemic being responsible for yet another significant decrease in borrowing costs. With good yields preceding high prices — the current disparity between old crop prices and futures aside — the 2020 crop year was also a profitable one for much of the province. With more readily available cash and a lower loan burden, growers felt no need to pull back on land acquisition.

“The futures prices for (corn, soybean, and wheat) are well below the old crop prices but are still significantly better than most we have seen in the past six to seven years,” said the report.

Livestock density in the traditional livestock areas of Ontario continues, as it likely always will, to have an impact on land values.
If prices and interest rates continue on this trajectory, Parker believes it’s possible the rate of increase in 2021 could double that seen in the previous year. “We’re not seeing too many new sales that are not new highs. It’s tough to gauge though because there are not a huge number of sales,” he said. “That leads me to believe we’re going to see some jumps.”