Last commentary eight weeks ago Bob Hunsberger, Wallenstein Feeds, Hog Economics Summary Sheet showed profitability per pig with average production at $26.34. an incredible reversal of fortunes of $65.61 from the previous eight weeks. Then the next twelve-month projection had moved from a loss of (-$4.24) to a profit of $27.68.

Now incredibly a further eight weeks on profitability per pig with average production has nearly doubled to $51.03. Well, the next twelve-month projection has held steady at a profit of $24.98.
Ontario Pork for last week reported Average price/ckg DW total value at $261.60. These are prices and margins last experienced in 2014 with PED. The seven years in between has had considerable periods with not a lot to recommend it. Therefore, sorely needed to restore the industry. 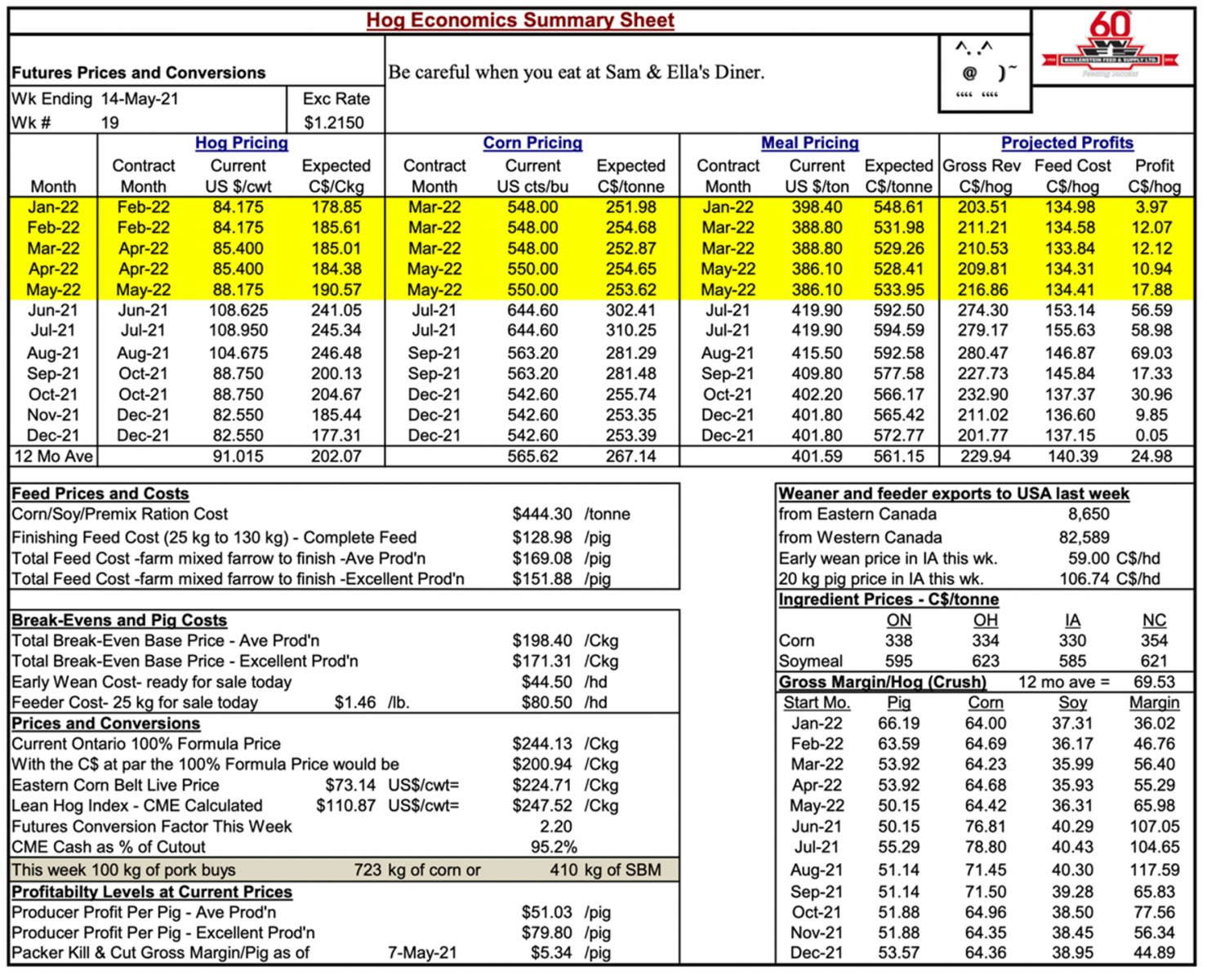 This is all aligning with a general rising tide, lifting all boats in Canadian Agriculture such that discussion of a Commodity Supercycle is making it into the public press. Below, parts from the Globe & Mail – Canada’s main premier newspaper. (source)

Growing demand as the global economy recovers from the COVID-19 pandemic, coupled with supply shortages from droughts in some areas of the world, have created the chance for Canadian farmers to earn more money in a cyclical industry.

Depending on the crop, agriculture prices have increased between 10 and 75 per cent from last year, says Brandan Leslie, manager of policy and government relations for the Grain Growers of Canada.

Prices started to increase about 12 to 18 months ago, then underwent a big jump in 2021. Canola recently hit a 13-year peak after stubbornly low prices, gaining 52 per cent year-to-date. Corn has surged 50 per cent in the past four months to reach its highest level since 2012, Soybean prices are returning to levels not seen since 2013-2014 and Wheat prices are the best since 2012.

“All of the benchmark crop prices are back to the highest they’ve been since that very severe drought that they had in the Midwest back in 2011-2012,” said Aaron Goertzen, senior economist for the Bank of Montreal.

The big exception was corn, which was affected by reduced fuel consumption because of its use to produce ethanol that’s mixed with gasoline. Prices for the corn-based fuel derivative are up 63 per cent in 2021, mirroring a recovery in gas prices.

China is always a driver of commodity demand, but the world’s second-largest economy has taken a renewed interest in feeder crops after purchases were hurt when about 30 per cent of its hog herd was culled in response to a mass outbreak of African swine fever starting in 2018.

China has significantly increased its purchases of U.S. soybeans since a boycott during trade tensions under former president Donald Trump. China is the biggest consumer of soybeans, accounting for about 60 per cent of global sales.

“As that herd is now coming back, China’s increasingly buying feed products on global markets and of course now with the trade war also over, it’s buying them also from the U.S. and so that’s been supportive of pricing as well,” said Goertzen.

“We’re an exporter of raw materials, a ‘hewer of wood and drawer of water’ as they historically have said, so it’s a plus for Canada when we’re getting more for those commodities.”

However, as is often the case, a few clouds on the horizon. This time is different than in 2014 which was driven from the supply side in North America due to PED. This time as observed by economists like Kevin Grier is driven by the demand side. Other than normal seasonal tightening of supplies we don’t particularly have a supply issue. This is demand driven with tremendous exports as well noted by China’s challenges but also by Covid.

We have had impressive domestic demand in Canada (and the US) with a shifting from foodservice to at home. Unfortunately demand, like luck, can be a fickle lady. As we overcome Covid and the economy opens up will this demand wane? Or as inflation kicks in (which it presently seems to be doing) will consumers reduce their meat consumption?

Unionized workers at Olymel’s Vallée-Jonction processing plant in Quebec have walked off the job, forcing the facility’s closure and hogs to be diverted to other Olymel slaughterhouses or resold to U.S. packers, an Olymel spokesman told Meatingplace on Friday. The strike began on April 28, shuttering the facility.

Of the 25,000 hogs that Olymel buys weekly from Ontario producers, 20,000 are being resold to U.S. packers, Vigneault said. At issue in the strike are wage demands. The striking employees, represented by the Olymel Vallée-Jonction Workers Union, have asked for a raise of 35% in the first year of a new contract, increasing to 51% of current wages at 3-½ years, Vigneault said. “We can’t accept this. This level of raise would put Olymel out of the market at that plant. We can’t afford that kind of raise,” he said.

The thought is both sides are dug in and that this could be a long strike. Fortunately for Ontario producers, due to the noted demand, their hogs are handily going into the US. But this can and likely will change. Then once again the challenges and weaknesses of the Canadian and particularly the Ontario packing industry will once again come home to roost.