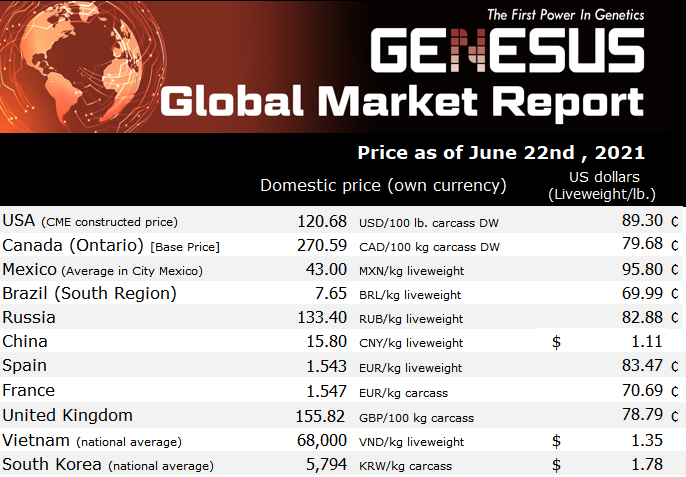 China Pig and Pork prices have dropped for 20 consecutive weeks, triggering a third level alert by the National Development and Reform Commission. The recently formed commission aims to alert producers to make changes in their production plans, while at the same time adjusting pork reserves to stabilize prices. According to the National Bureau of Statistics, the current live slaughter pig price was 15.8 yuan/kg ($1.10/lb.), down nearly 60% from 36.8 yuan/kg ($2.50/lb.) in early January.

So why the big price drop?

The last two years of high prices and huge profits spurred massive investments by large scale producers and outside investors into the industry. At the same time, local governments have been supporting the construction of new modernized farms within their own areas. Thus, the rapid expansion has resulted in increased production capacity and more pigs to the market.

What other factors have contributed to this surprising drop in price?

Industry experts say that heavier carcass weights (130kg) from producers wanting to capitalize on higher prices have contributed to more kg of pork on the market. Also, continued pork imports meant to assure supply have affected the market price. Finally, the summer season is historically a time of lower demand.

China’s pork production structure has undergone significant changes. High prices and huge profits have accelerated the shift to large scale farms. According to MARA, the number of large-scale farms (>500 pigs per year) increased from 160,000 to 178,000 in 2020. In May, the number of pigs slaughtered by large scale companies in China was reported to be 19.96 million, a year-on-year increase of 44%.

However, in 2021, rising feed costs and increased costs of production coupled with lower prices have tempered expansion plans. Our observations are that some companies may continue with their plans, but most have slowed down or even paused until prices improve.

No doubt prices will improve, but it’s times like these that underscore the importance of better Genetics needed to improve efficiencies and survival. If you’re in the market for higher quality genetics that has more pigs, grow faster, don’t die so easily, and have tasty meat, Genesus can help – give us a call.