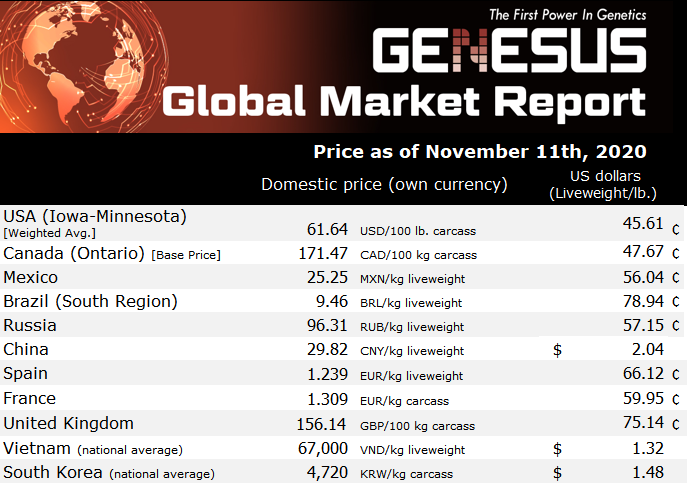 According to the National Bureau of Statistics, the number of live pigs in the China market is increasing. At the same time, live pig prices have been decreasing over the past 12 weeks. The current average live pig price was 29.82 yuan / kg (($2.05/lb.), which was 23.0% lower than that in the same period last year.

China imported 6.58 million tons of meat from January to August, exceeding the 6.18 million tons imported in the whole of last year of which pork accounted for the largest proportion. The share of pork imports rose, while the proportion such as beef declined. China suspended meat imports from Germany and Poland after Europe’s largest pork producer reported its first case of ASF. China’s meat imports are expected to hit a record high by the end of the year.

The Ministry of Agriculture and Rural Affairs (MARA) recently organized a group experts to evaluate the recovery of live pig production, pork imports and consumer demand. It is estimated that the pork supply will increase by about 30% year on year by the time of Spring Festival 2021.

It has been reported that there are 2.6 million producers in China with 355,000 pig production related enterprises. Of those, 71% have registered capital less than 1 million each, which indicates most pig farms are small and medium size enterprises.

China recently announced the Plan for National Economic and Social Development and its long-term goals. Swine production is included in the national security strategy. Those larger and more established companies are expected to receive the most government support and play a vital role in organizing production involving family farms.

New Trends in the Industry

Today the family farm is a new concept in Chinese industry competing with backyard small farmers. Backyard farms produce for self-sufficiency, while family farms are commercially driven farming businesses owned and operated by family members within a larger production system.

Another trend that seems to be growing in popularity are multilevel pig barns. Those enterprises building these have included Muyuan, Wens, New Hope, Tianzow, Lihua and other pig production giants. The tallest is to be 26 floors with the advantage of requiring less land to build, but more expensive to construct. It remains to be seem how popular these will become, but the popular trend cannot be ignored in China.

High pork prices have no doubt had an effect upon demand, but pork is still the No.1 meat of choice by the Chinese people. Consumption is actually projected to increase as result of the continued urbanization trend in China. Over 100 million people from the rural areas are expected to move to the cities by end of 2020.

At present, the per capita pork consumption of rural households in China is less than 70% of urban households. According to the current consumption level of the urban population, it is estimated that pork consumption can be increased by about 700,000 tons as result of this migration.

According to the National Health and Family Planning Commission, the total population of China will reach 1.43 billion by end of 2020. Based upon a population growth of 60 million people and the current consumption level (per capita consumption of 41.5 kg), the newly added population will increase pork consumption by about 2.5 million tons.

The pandemic obviously has impacted pork consumption per capita given the reduced dinning out and travels. However, it seems life is returning to normal in China and market forces are expected to keep the demand for pork strong. This is good news for pork producers and exporters of pork.