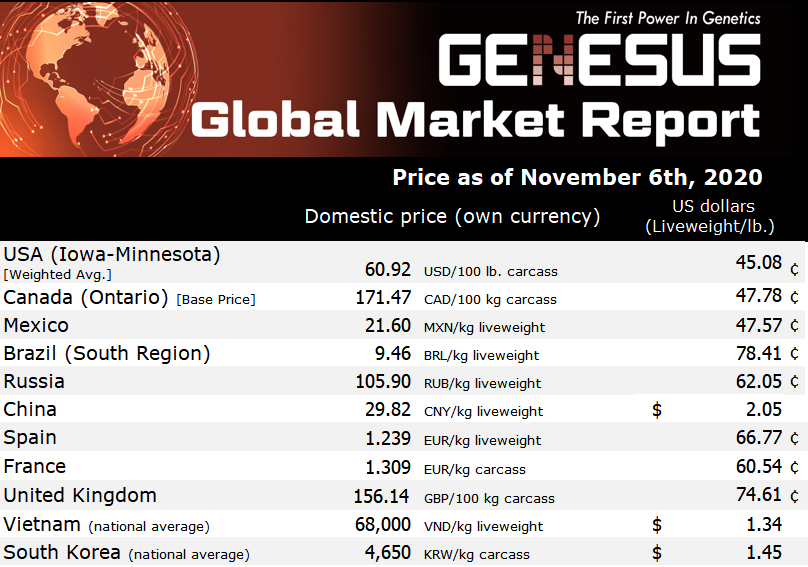 The week following my last report, the news about the ASF in Germany got out. This added to the current situation means that we have several issues that are making the market at least different/uncertain.

To the usual situation of today’s market in this time of grater offer vs demand; lower prices and increased weights, it is added:

We cannot see where we are going, and this has generated great uncertainty in the Spanish and EU market.

On the other hand, prices are lower but not to the extent it was in previous years. Both 2019 and 2020, have been atypical years in terms of price, but the trend of weight gain is clear.

Occurrence of ASF in Germany has generated fear that it will reach Spain territory with its terrible consequences including the closure of export to China. Biosecurity measures are being extreme, with institutions such as MAPA (Ministry of Agriculture), ANPROGAPOR, and INTERPOR, calling for awareness on imports of piglets and markets hogs to avoid as Dr. Sanchez Vizcaino says “poisoned candy” entering Spain.

Demand for piglets is increasing, typical for this period of the year, but now piglets must be born in Spain, otherwise, exports of meat are not allowed outside EU. With no exception, pigs must be born, raised, and slaughtered in Spain to do so. It should be noted that Spain is the world’s leading exporter to China in the period from January to September, surpassing the U.S. and Germany

Obviously, there is an oversupply of hogs on the EU market due to the closure of German exports to China. Those who will suffer the most are the Netherlands and Denmark. These are the major suppliers of piglets and market hogs for the finishers and packing plants in Germany. This will lead to a restructuring of European swine production, which will undoubtedly influence Spain.

To this new European scenario, we must also add the news that has appeared in the Spanish press that the German Group Tönnies, after signing a rental agreement for a small packing plant in La Mata de Los Olmos (Teruel) and will invest one million euros in the facility. In the short term, it plans to increase its production capacity to around 4,000 hogs per week. It also seems that the construction of new facilities in Calamocha (Teruel) is being scheduled, but while this project is being carried out, they will be working from this small plant. They have already met with important production companies to present their project in Spain. Voices are beginning to be heard saying that this project should produce and process hogs of higher quality and greater weight meant for export. These must be based on the Duroc.

In view of this emerging segment with greater slaughter weight, the differences between gilts and boars are being recognized. In Spain where the piece of ham is so important, changes must be made into animal handling and different diets to bring the carcasses into line and try to minimize the existing differences between boars and gilts of heavier weights. The goal is to obtain a more homogeneous product.