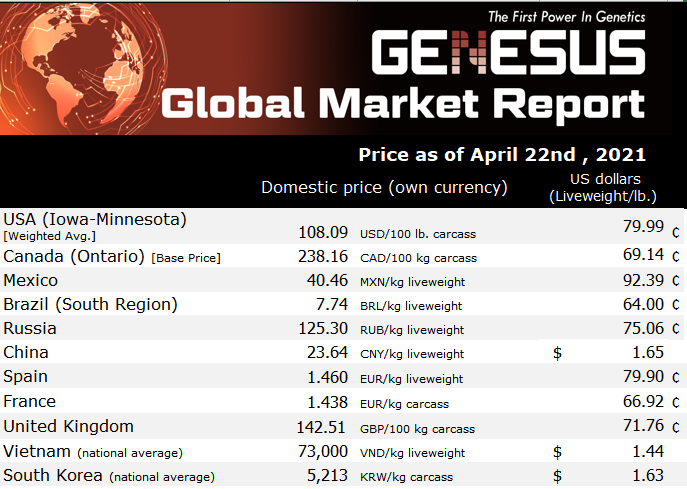 We started the year with the lowest price in the last 5 years; 15 weeks later, has reached the highest value of the same period with an increase of 33.21%. We have started the year with record weights, 1 kg more than in 2018, and almost 2 kg more compared with 2020. Although weights have been going up year to year; this year we see a significant rise especially for this time of the year (the highest weights of the year are usually right after Christmas).

“Price goes up, weights go down” – this is usually “the law” of supply/ demand, but the market has changed. This year’s continuous high demand breaks the pattern we were used to seeing.

All this is a logical consequence of the Spanish Pork Market position worldwide, the ASF situation in the EU (mainly Germany), and China.

If we look at Spain’s exports in the last 5 years (Source INTERPORC/DATACOMEX), we see that:

This shows that Spain has done and is doing a good job positioning itself in Asian markets, especially in China. This is excellent news for producers and the meat industry, and a recognition of “a job well done”. Despite the increase in raw materials, producers continue to make profits and so do packers.

The question that arises is: for how long and in what form will this race continue? So far it is clear to all of us that what is being exported to China is a pure “commodity” (without added value) and more and more voices are being heard indicating how long will it be possible to remain in this position with this type of production?

It is necessary to find ways to produce higher quality meat at competitive prices. Just a few days ago an article came out, which has aroused the interest of companies in the sector, in which Professor Carlos Buxadé, a great expert in these subjects, warns us that we are facing a “conjunctural” situation that will not last more than two or three years, and we need to expect China will start asking for better pork quality. (source: https://www.agronegocios.es/espana-el-segundo-proveedor-mundial-de-china-de-carne-de-porcino/) If Spain won’t be able to satisfy their expectations China will look towards importing for countries like Canada, where pork is less leaner than Europe including Spain.
Genesus has great experience in international pork markets, and we can attest that over 70% of all boars used in Canada – USA are Duroc. We are not aware of Chinese, Koreans, Japanese buying anything but Duroc boars for import, some Pietrain in Vietnam, Thailand, and Philippines almost all Duroc.