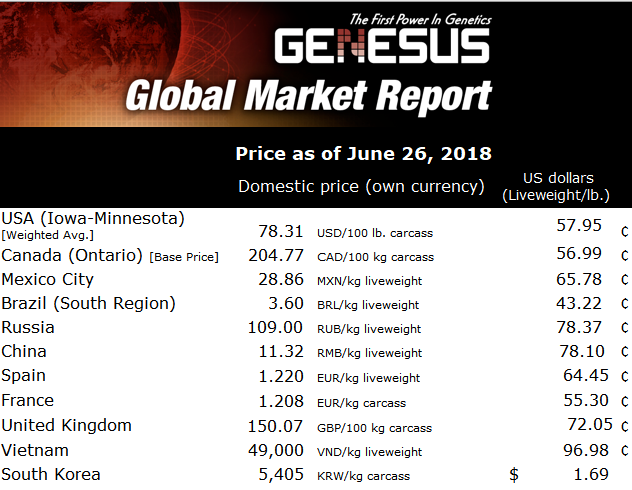 On June 15 the general assembly of the Breton Pork Market (MPB) occurred in Plérin.

This was an opportunity to appraise achievements made in 2017 and make a first observation for the beginning of 2018.

First, in 2017 the number of pigs marketed by the MPB grew by 12% in comparison with the previous year, to reach 1.8 million pigs with a weekly average of 34 695 pigs/week.

Over these first 23 weeks of slaughter, the carcass weight is slightly heavier than last year over the same period.

GROWTH OF THE AVERAGE WEIGHT

Last June 14 during their extraordinary general meetings, the coops in western France, Prestor and Aveltis, endorsed their fusion to create a new structure: Evel’Up.This new Evel’Up coop should amount to 4.2 million growing finishing pigs, produced by around 1,000 producers. This will make Evel’Up the French n°2 after Cooperl.

Welfare pressure It is now obvious that there are more and more societal pressures regarding the animal welfare (Northern Europe countries are the leaders).

After grouping the pregnant sows, several producers anticipate the next step will certainly be the welfare farrowing pens in the sow barns.

Moreover, nowadays, it is not unusual to see producers install these welfare farrowing pens throughout an expansion or the construction of a new farrowing barn.Thus, for the producers, the challenge will be to work in these new conditions while being safe (farmer welfare). Indeed, some genetics will tend to be more or less aggressive towards a human in wanting to protect their piglets.  Another example, in several European countries, people begin to consider stopping the tail docking in the medium/long term in the conventional farms. This is already the case in Organic Farming.

Nowadays, several researches are being explored via the nutrition, the environmental enrichment (toys, straw), environment control… Genesus started one and a half year ago a study in Germany, in collaboration with an University and a packing plant, to follow the behaviour of Genesus pigs (Genesus F1 x Genesus Duroc). The first batches of Genesus pigs which have not endured the tail docking did not show any tail biting problem.

Genetics can bring solution to the new welfare challenges for the future.