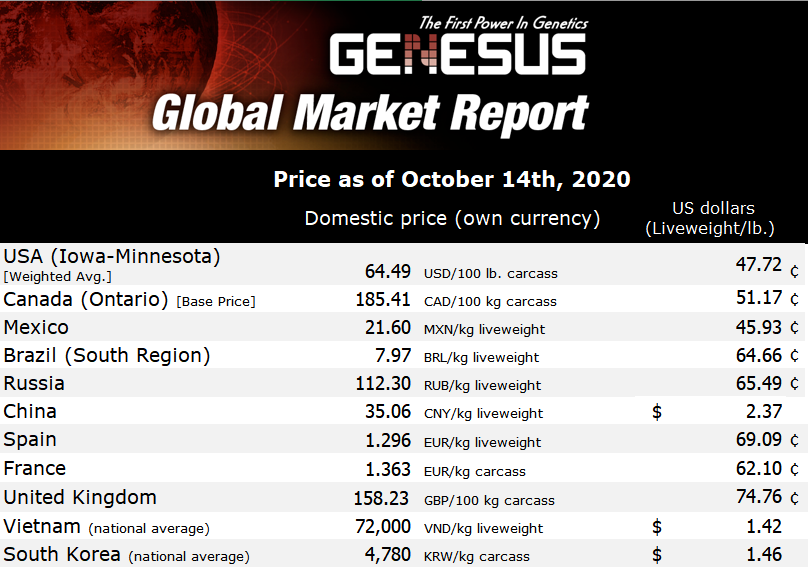 Hog market: The Impact of ASF in Germany

On 10 September, the African Swine Fever virus was detected for the first time in Germany on a wild boar found dead near the border with Poland, in Brandenburg. The European markets, especially those in the North of Europe linked to the German market, were shaken, while the German market lost 20 cents per kg (about $ 0.236).

In France, despite a period of uncertainty, the hog price remained rather stable in September due to good demand.

However, with the German situation not improving (hogs are backed up, heavier weights, work slowdown in plants due to Covid issues) it will be necessary to remain attentive to this evolution, which will eventually impact the other European markets including France.

What makes a good producer?

Some hog producers are recognized by their colleagues or by the various players in the industry to be “good producers”, but what does this mean exactly?

First of all, for someone outside the hog industry, that can certainly mean, that they are competent producers who know how to provide all the care necessary for the welfare of their animals. I agree with that definition but is not just that.

Very often, when we try to understand and ask people from the French industry to find out what they mean by “good producer”, we are most often told: “It’s someone who has a high number of pigs weaned per sow” or else “It’s someone who gets a high lean meat premium” (In France carcass are paid on weight and lean yield) or “It’s someone who has a very good FCR” when it’s not all at once. Again, I only partially agree with those definitions.

From my point of view, a “good producer” is an experienced professional who is attentive to the needs of his animals, and who can do good profits from his activity as a pig producer.

Is that better to wean 13 piglets or 14 piglets per litter?
(If we take the example of a producer who has 40 farrowing crates available per sow batch)

Producer A: 45 sows are served, and the farrowing rate is 89 %
40 sows farrow and then wean 13 piglets without extra milk feed (only with the mother’s milk). We get a batch of 520 weaned piglets.

Producer B: 45 sows are served, and the farrowing rate is 83 % (lower fertility and sow fights during gestation)
37 sows farrow and wean 14 piglets with addition of milk feed to supplement the lack of breast milk. We get a batch of 518 weaned piglets,

To extend the logic we could have talked about weaning weight (which is very important for future performance in nursery and finisher) which will be probably heavier with Producer A.

Is it better to get 10 cents or 15 cents as lean meat premium per kg carcass?

Again, the answer is not necessarily what you think, it depends on the growth rate.

In this case, Producer A earns about €5 more per pig than Producer B, even though his lean meat premium is lower.

Being a “good producer”, is not just a simple technical performance, but rather whole management of the farm by maximizing the number of kgs produced by square meter available in nursery/finisher (or the number of weaned piglets per farrowing crate per year), with a good cost of gain.