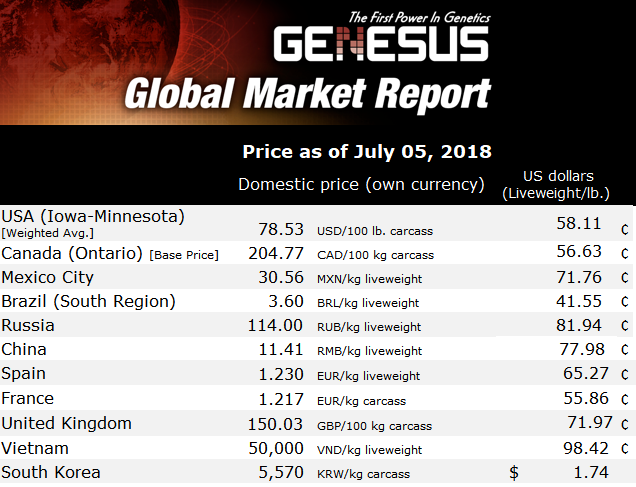 Current pig Price is 114 Roubles per kg $1.81 (with VAT) per kg live-weight. As has been the case for the past years pig production in Russia remains very profitable for the good an efficient farmers. New farms continue to be built and domestic production continues to decrease meaning a net increase in production. Of course there are old and inefficient farms that are losing money! Like everywhere else in the world, those farms that do not invest in up to date facilities and the very best genetics have high costs and go bankrupt.

Russia is now exporting small amounts of pig product. It is hoped that this will increase significantly over the next years. Per kapita consumption is also increasing a little and the pork that Russians are eating is also changing. This is on the back of growing incomes / consumer confidence. Historically a lot of pig meat was eaten as very low quality low value sausage (produced from imported meat). Russians are now eating more fresh pork and higher quality sausage and processed pork.

With a population of about 145 million people, if consumption increases by just 1 kg per person Russia needs about 70,000 more sows in production! If Russia were to get to per kapita consumption of around 40kg per person another 1.26 million sows are required! There is certainly plenty of space to build new farms, more than enough land to grow feed for the pigs to eat and also a lot of people to work on farms. Productivity on Russian pig farms per person is still low when compared with Canada / USA and many parts of Europe.

Increasing pork consumption is a factor of both consumers disposable income and also consumer perception of quality and value for money. Of course different people have different perceptions of what this means.

10 to 15 years ago in Europe, when it was realised there was a problem with populations getting fatter and fatter that the issue was people eating too much fat. There were big health drives on reducing fat consumption. Pig grading systems reflected this with premiums being paid for very lean pigs. Problem is the population continued to get fatter and fatter.

For the European pig industry it meant static and even falling pork consumption as very lean pork tends to be dry and tasteless. This trend is changing. The one real success story in Europe is Ibirica production in Spain. Ibirica meat is much fatter than ‘commercial pigs sired by a white or Pietrain type boar). Incidentally a lot of Ibirica meat is 50% Duroc! Ibirica meat selss for more than standard and the famous Ibirica Jamon can sell for 100’s of Euros for a single ham. Demand in Spain and for export is expanding.

Today in Spain there are 3 types of pigmeat available. Standard, Duroc and Ibirica which sells for increasing prices.

Dieticians now realise that the issue was not eating natural animals fats, but eating far too much sugar and processed foods. Today Russia has started the same process encouraging healthy eating and exercise.

One thing that is required in Russia to encourage pork consumption is a new system for grading pigs after slaughter. The one is use is today very antiquated, introduced in 2008 and has just 4 grades for slaughter pigs.

The first grade, which in principle paus they highest price nobody wants to produce or buy. It has live-weight at slaughter of 70kg to 100kg or less and 2cm or less of backfat. It seems crazy to still have a system in use where the top grade is not produced!

When you consider also that the measurement is done manually with a ruler, which allows for human interference (easy to adjust what farmers are paid by grading 3 rather than 2).

Pigs get leaner as you go from the shoulder to the tail. This means that a grade 3 pig (3.1cm of fat) can actually have more leaner cuts of meat than a grade 2 (3cm) pig. There is certainly no way that the grade 3 pig is worth 3 or 4% less at slaughter!!

A grading system should be designed to maximise profitability within a system!

2, Encourage higher price – again better tasting and more meat in the higher value cuts (neck in Russia – the more port that looks like neck the more the pig can be sold for!!)

Ultimately it is best taste and tenderness that consumers will go for. By definition this is difficult to measure! However there are measurable traits that are easily measured in carcasses that are known to be very correlated to taste and tenderness. They are pH, colour, marbling and shear force.

In Russia many many things have changed since 2008. Perhaps time to update the grading system to encourage more domestic pork consumption.