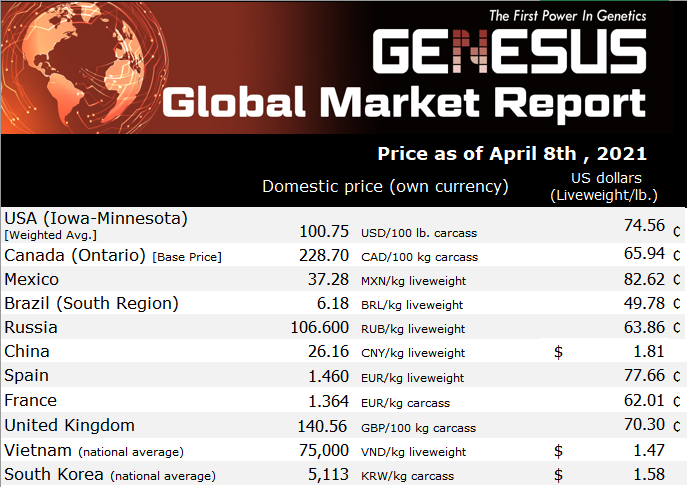 The Mexican pork market has been gradually recovering from the low prices at the beginning of the year. In the last month and a half, it has managed to push up the prices by around 15¢ US per pound liveweight (from 65¢/ lb to 80¢/ lb) in the last two months.

Unfortunately, not everything has been good news, since the prices of grains, most of which are imported, have risen 50% in cost, significantly impacting pig production costs. If the exchange rate between the Mexican peso vs. US dollar remains stable as up to now, around 20 Mexican pesos per dollar, it is still profitable to produce with the high costs of food raw materials.

The situation would become more dramatic if the Mexican peso suffered a devaluation, which is not strange, especially in times of high volatility such as the current ones.

The recent spike in pork prices is believed to be due more to seasonality than any other effect. It is normal that at the end of the Holy Week and Easter festivities the consumption of red meat returns to its normal course. However, what happened in the last year has been very atypical due to the Covid-19 pandemic.

Pork consumption has been hit hard as a large portion of the population has lost their income. The activity of the tourist and restaurant industries in the country has been depressed by the constant restrictions ordered by states and federal governments to mitigate the spread of the disease among the population.

With over 2 million cases and more than 200,000 deaths due to Covid-19, the country has been hard hit. To date, approximately 1% of the 130 million inhabitants that make up the Mexican population have been fully immunized.

It is also believed that other external factors have contributed to a recovery in live pig prices, and these are mainly an increase in exports to China, showing higher demand. As well as the increase in swine diseases in the United States such as PRRS and PED.

The expansions foreseen in 2019 are still pending, awaiting further stabilization of the market. We have even heard of some producers and some packers wanting to sell their assets, both farms and meat processing facilities. Normally you do not sell your business assets when things are very buoyant.

Among pig producers we would say that there is resilience and buried optimism, hoping for a clearer and more attractive second semester.