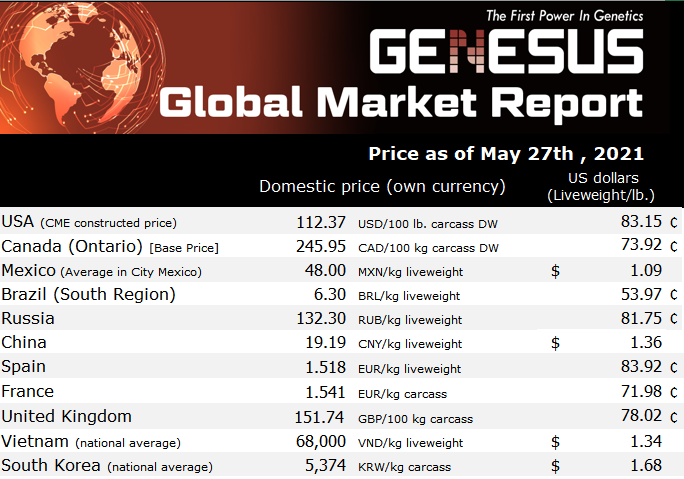 What is currently happening in the Mexican swine market is interesting and atypical. During the last days we have been in touch with pork producers and with pork producers associations leaders, who say they are surprised by the turn that the pork business has taken lately, especially regarding historical prices that have broken several records.

Now, if we did the calculation comparing the exchange rate of the Mexican peso vs the US dollar on the two dates, and putting everything in pounds, the variation is even greater, it shows us an increase of 50.70% in the last three months. Here the calculation:

This calculation is interesting because it also tells us about a recovery of the Mexican peso against the US dollar, which favors to some extent the high costs of imported grains, further improving the profitability of the local Mexican producer by achieving a higher cost: benefit in feeding their animals.

The above prices are from the State of Jalisco, which produces 30% of the total pork in Mexico. The price in Mexico City is around 48 Mexican pesos (approx. US $ 1.10 / lb liveweight).

Current market prices have been driven by supply and demand, mainly due to the following factors:

Pig production, however, has started to recover due to the isolation imposed by the government in the last year, reaching 3.3% in April, compared to the same period in 2020.

On the other hand, the COVID impact on the food and tourism industry has begun to slowly subside its effects, as it begins a progressive reopening of restaurants and hotels throughout the country, where the vaccination campaign is fervently advancing.

Consumption of pork products is optimistic with many positive numbers compared to 2020, and a growth of 3.2%.