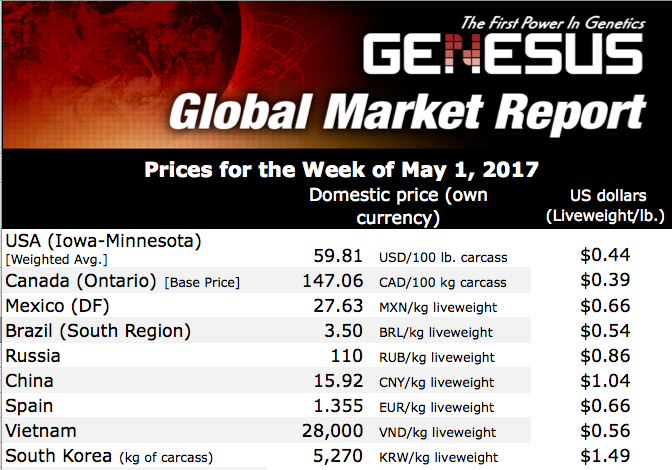 Pig price currently is currently 110 Roubles per live kg ($1,92). For good farmers, pigs continue to be very profitable, but for many not! Some are even losing money (incredible though it seems). I was asked a week or so ago, “why when Russia has low grain cost (wheat at 8900 Roubles ($156) per metric tonne), low labour cost (about $500 per month) and low energy cost (petrol $0.56 per litre at the pump) why are costs of production so high”?

Russia wants to continue to grow its pig industry and become a net exporter. For me this is a very sensible ambition. Russia has a massive land bank and can produce a lot more grain. There is a lot of land to build farms on and of course use for slurry disposal – as a valuable organic fertilizer that can increase crop yields. There are today a lot of skilled pig farmers who can get globally competitive production results.

One major obstacle to this happening is a high (average) cost of production. When you want to trade a global commodity like pig meat, you need to be globally competitive on cost. In any commodity market the lowest cost producers have the advantage.

Having grown up within the European pig industry and also having worked for the world’s largest pig producer it is very easy to see where the extra costs are.

1, The first is excessive legislation, most of which comes from the USSR. In soviet times, everyone had to have a job. State farms were created to feed and occupy people, not to be profitable.

There is some modern legislation that seems to originate from the EU. As far as I can see, the EU is steadily legislating its pig farmers out of business, with more and more rules that simply add to cost of production and ultimately only put up the cost of pork for the consumer!!

This excess legislation is the cause for many high costs. Just last week I was at a farm that was set up in Soviet times. There were over 400 people working with 7000 sows! The total salary cost per pig produced was considerably higher than either Europe or North America.

The administration costs, directors, accountant’s lawyer’s etc. was in excess of $9.00 per pig sold. I would be targeting $1per pig, even taking into account the excess administration in Russia a maximum of $2!

Excess legislation adds to the cost of everything. Farms are expensive to build (despite low cost labour and building materials). The process of getting permissions is expensive and slow. Getting bank loans is administrative and complicated.

2, The “I want” culture. Having spent a lot of time in Russia over the past 12 years I observe many spoilt children, especially boys, spoiled by their mothers! They learn from an early age that they can get whatever they want. This behaviour follows some into their working lives. Spoilt children never learn the real value of something.

3, Inability to take decisions. This is caused by the “punishment culture” that comes from Soviet times. Mistakes were punished, success ignored. Still today if something goes wrong on a Russian farm, it seems to me that 99% of the effort is put into finding who was responsible, rather than sorting the problem.

Fear of punishment means many managers daily focus is avoiding mistakes and trying to find someone to blame for anything. I have been on farms many time and asked manager for a simple production report. Many time I have been told, sorry I can’t, the data in-putter is on holiday today and only she can print reports. My response, but you are the manager, surely you have access to information and can run the management program? Answer, no its not my job!

The inability to make a decision means its easier to change nothing, than risk changing something. Therefore, nothing changes, production stays the same and inevitably costs rise and rise!

4, Subsidies and protected market. Both have an important place in helping to establish business, but only as a catalyst (the business has to be profitable without the support, otherwise it is a rally bad idea to subsidise).

Ultimately however subsidies do nothing to help companies become globally competitive. They do help to keep inefficient and poorly business profitable!

5, ‘Russians like suffering’ is something I am often told. This is something that has made Russia what it is today (we need only look at how Russia dealt with the German invasion in the 2nd world war. The ability of Russian people to put up with poor work and living conditions, low salaries, poor quality food, bad service, is incredible! I hear so many times “its Russia”.

Accepting what has always been and nothing will change stops real development.

In Russia is see some very clever business owners that want to get on and create excellent globally competitive business. I see many very clever young managers who understand the problems of high cost and who get very frustrated being desk bound filling in forms, rather than being on farms producing more pigs. I also see many skilled production workers on farms who are more than willing to do more and earn more money.

Russia could easily double (and maybe triple) its pig production and not hire a single person!

Will all this happen? Time will tell.