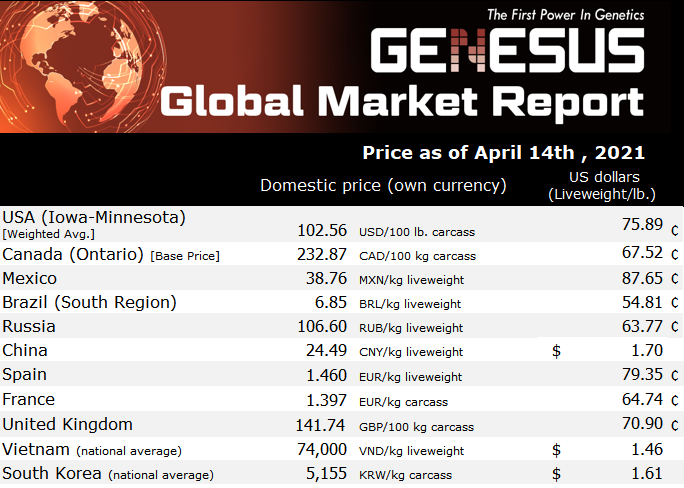 The average market price of regular slaughter hog for the month of March 2021 went down by a few pesos. As per ProPORK weekly price monitoring, the average March price was 184PHP (3.86 USD) per kilo vs 188PHP (3.95 USD) in February 2021. Culled sow prices on the other hand remained constant at 110PHP (2.31 USD) per Kg. Prices of key feed raw materials are on an uptrend.

As for key economic indicators, the March 2021 inflation rate was at 4.2%, down by 0.5% from the previous month (source: Central Bank of the Philippines). Inflation for food index at the national level slid to 6.2% during March, down from 7% in February 2021. The annual rate of meat index moved up to 21% in March 2021. The Peso to US Dollar exchange rate was steady at 48.52 PHP to 1 USD.

A 60-day price freeze was implemented by the Department of Agriculture (DA) so as to make the retail price of pork and pork products more affordable to consumers. It took effect on February 8th and will last up to April 8th. By doing so, the Department was also shielding the negative impact on food inflation rates.

Another measure that was taken by the DA was to source live hogs for slaughter in the Visayas and Mindanao regions with a negotiated price and with additional shipping subsidies. As of April 1st, there were no shipping subsidies released to cooperating farms.

A pork holiday was instituted by the two hog raiser federations, namely the Pork Producers Federation of the Phils and the National Federation of Hog Farmers Inc. The aim of the pork holiday was to lessen the pork availability in Metro Manila from Apr 3rd to 8th. It was successful, as per the monitoring groups, supply was lessened by 80%. Luzon-based farms selling to Metro Manila did not sell their hogs and just allowed them to grow. Shipments from Visayas and Mindanao were canceled. Everybody was on holiday mode due to the Lenten season.

The pork holiday is also meant for farmers to show the disgust to the government policy on how the ASF situation was handled and to show the public that this problem will have a detrimental effect on pork consumption and its impact on the price of chicken, beef, and fish. Not least as a protest against the planned addition of 350,000 MT in the Minimum Access Volume given to meat importers and the accompanying lowering of tariffs from 40% to 5%.

By Apr 7th, an Executive Order (number 128) was already signed by the president allowing the above things to happen and be implemented. Aside from the additional imports and lowering of tariffs, the DA has already dictated the selling price of imported pork cuts to the consumers. Shoulders will be sold at 270 PHP (5.67 USD) per kg, bellies will be sold at 350 PHP (7.35 USD) per kg. The receipt below shows the selling price of the imported shoulder ex cold storage facility and is priced at 165 PHP (3.47) per kg clearly favoring the meat importers.

Looming pork shortage in Thailand. Massive live pig exports and outbreaks of combined diseases in Thailand are rapidly dwindling the nation’s pig and parent stock populations. If this situation remains unabated, shortage of pork in Thailand will be looming soon.

Thailand’s shipped over 2.7 million commercial pigs and parent stock gilts in 2020 to neighboring Laos, Cambodia, and Vietnam, according to statistics from the Thai Swine Raisers Association. This accounts for 15% of the country’s total production of about 20.45 million heads

The export raised live pig price in Thailand to a record high of about THB 80/kg ( 2.7USD/kg) in 2020. The association estimated that the rising domestic price would slightly boost the country’s pig production to 20.5 million heads in 2021. The association’s estimation is unlikely to be realised as a combination of disease outbreaks in Thailand is resulting in massive sow culling, expected to reach 100,000 heads or 10% of the country’s sow population as of the report time.

The number of culled sows is particularly high in outbreak areas such as in northern and eastern regions of the country. Repopulation of the sows in affected areas is unlikely to be realised soon due to movement restrictions being imposed by the livestock authorities.

Live pig exports from Thailand to Vietnam via Laos and Cambodia since January 2021 were falling since January to these days. Proliferation of Covid-19 in Vietnam slows the import due to slow consumption domestically.

The only way to recover the Thai pig industry is based on effectiveness in the control of outbreaks and replenishment of fresh breeding stocks and genetic resources from within the country and abroad.

Thaifoods Group plans to invest USD 90 million in new PS commercial farms and feed mills this year and increase its pig production capacity in Thailand by 20%.

According to a report from the General Statistics Office, in February, the total number of pigs increased by 15.5% over the same period last year. As of February 20, 2021, the whole country no longer has PRRS (blue ear swine epidemic), foot-and-mouth disease has remained in 7 localities and ASF epidemic has remained in 21 localities.

Vietnamese scientists have for the first time successfully cloned pigs using the somatic cells of ear tissue. Four healthy pigs were born on March 10 using somatic cell nuclear transfer technology.
Visiting the National Institute of Animal Sciences on March 14, Minister of Agriculture and Rural Development Nguyen Xuan Cuong said this was an important breakthrough for Vietnam’s animal cloning sector, proving the country’s scientific and technological role and position in the region and beyond. The institute launched the project to study the cloning of pigs using somatic cell nuclear transfer technology back in July 2017. Head of the institute Dr Pham Cong Thieu said although the facilities and equipment were limited, Vietnamese scientists have strived to study and apply animal cloning technology. This outstanding achievement has opened up new research opportunities to apply animal cloning technology in breeding, preserving rare and valuable animals as well as creating livestock resistant to diseases and the impacts of climate change. It could also help to create cloned pigs for organ transplants in the future, he said.

Over the past many years, dozens of potential enterprises have been investing a great deal of resources (many have invested thousands of billions of VND) to build very modern closed pork production chains. As a result, many types of pork products from Vietnam have been allowed to be exported to other countries in the region and around the world pork markets in countries such as Malaysia, Singapore, Hong Kong, Myanmar, Saudi Arabia, Australia, etc. In recent years, the Department of Animal Health has actively supported, instructed in great detail, and notified the pork exporters in regards to the preparation of documents, facilities conditions requirements. As a result, it is expected that more countries will be willing to come and check pork production chains of Vietnam, and if requirements are met to allow export. Therefore, localities and businesses are encouraged to continue investment and prepare adequate conditions in accordance with recommendations from the World Veterinary Organization (OIE) and importing countries that have been approved by the Department of Animal Health.