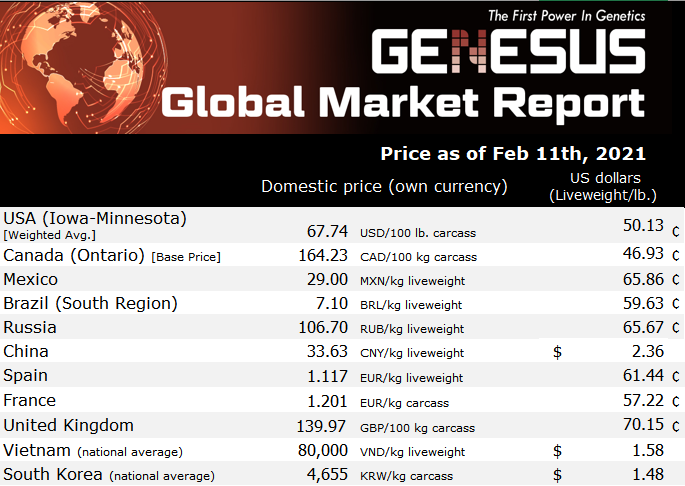 Lately, retail prices of basic necessities in the National Capital Region of the Philippines such as pork and chicken have increased significantly due to the threat of coronavirus pandemic (Covid-19). Also, supply of pork and pork products in Metro Manila was also brought down due to the African swine fever (ASF) outbreak.

Currently, the pig price in the Philippines is reducing due to Government short term price capping and the allowance of increased imports.

The Department of Agriculture (DA) released a copy of the new Executive Order (EO) imposing a price ceiling on pork and chicken products in the National Capital Region (NCR) effective for 60 days as follows:

The Office of the Executive Secretary has reassured the public saying that the price ceiling will not result in the undue diminution of meat traders’ expected income considering that the reduction rates are not greater than 25 percent of the prevailing market price. The break-even point for selling pork is only around PHP105/ kg ($1.25/ lb) liveweight

As bans on the transportation of pork and pork products remain in place across the country due to the African Swine Fever, Monterey, a national player, has found the situation challenging, which made it decide to shift gears and transfer inventories to local raisers. “This is one way to stabilize the supply of affordable pork in the country. More importantly, it will help boost the local hog raising industry. They can run this business at a lower cost, making it more sustainable. This also opens the doors for more Filipinos to become agri-entrepreneurs,” Ang said.

San Miguel Corporation (SMC) food unit San Miguel Foods (SMF) is also looking to transfer its nationwide hog inventory and facilities to local raisers to allow them to supply the requirements of their respective regions and help strengthen biosecurity practices among smallholder farmers.
“We want to provide our local piggery businesses a chance to thrive in these trying times, and encourage more smallholder farmers to grow this industry locally and responsibly,” said SMC president and COO Ramon S. Ang.

Pig price rises in Thailand as exports resumed. The price of live pigs in Thailand increased to $2.6/kg in February 2021, up 30% from December 2020. The price rise is a result of resumption in live pig exports to Vietnam that is getting back to normal.

Southern region of Thailand has a population of about 9.3 million people or 13% of the country’s 69 million people. Its pig production is far more than the local consumption. As a result, the surplus of pigs in southern Thailand is supplied to abattoirs in Bangkok and peripheral areas. Additionally, a part of the pigs in the south are also shipped across the borders of Laos and Cambodia to Vietnam. Some traders even load the southern pigs in modified fishing boats to deliver to their customers in Vietnam.

As southern Thailand is declared as an FMD (Foot-and-Mouth Disease) free zone, this makes it impossible for commercial pigs from the other regions of the country to be shipped to the south. Only breeding pigs are allowed to move to the south, but with a tight control by the Department of Livestock Development.

Relatively free from competition, pig production system in the south is undeveloped, compared with the other regions of Thailand. Here pigs are largely raised in open houses situated underneath rubber and oil palm plantations. However, there are a few large-scale, modern farms in the south, most of them belong to national livestock firms and affluent local entrepreneurs such as CP Group, Betagro, Trang Wattana Farm and Farmmesh Southern.

The price has slightly reduced due to increased imports from Thailand and because many farms reduced the number of heads sold so they can market them a few weeks before the national Tet Holiday. Tet is the Vietnamese New Year and is the most important festival and public holiday in Vietnam.

With the cost of production in the region of 45,000 VND per kg ($0.89/ lb), the MARD (The Ministry of Agriculture and Rural Development) requested CP, one of the major producers in the country) to reduce price for pigs sold to market. (danviet.vn). The Department of Livestock Production has also posted Official Letter No. 141 / CN-TATCN dated January 21, 2021 on the situation of prices and use of antibiotics in animal feed. (cucchannuoi.gov.vn).

2020 was a special year for the livestock industry of Vietnam that went through a series of unprecedented events in history. Never in history has the head of the Government, the Prime Minister, said that “pig prices are too high”. Indeed, until 2020, in the history of Vietnam’s livestock industry, the highest registered pig price was 62,000 VND / kg. In 2020 we saw prices reaching 100,000 VND/kg, as a result of the African Swine causing a loss of about 6 million pigs in Vietnam. Total sow herd has declined sharply last year, from nearly 4 million to only 2.7 million.

Vietnam is in 2nd place for countries that have managed the Covid-19 pandemic well, just behind New Zealand. From the start of the outbreak in Vietnam they got it quickly under control by April 2020. They had a minor blimp early in August 2020 but now everyday life is near normal except for the lack of foreigners. Even so, by the end of January 2021, the number of cases of the new variant of Covid has increased day by day and again more areas are being locked down for quarantine.