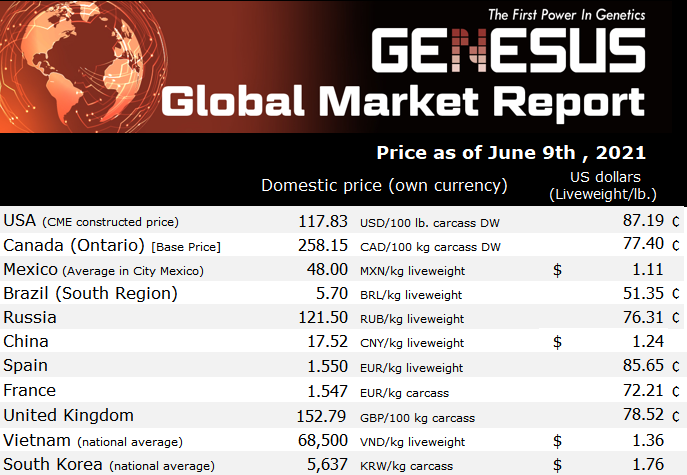 Pig price in Thailand plunged 15% in the last two weeks of May 2021, from THB 80/ kg ($ 2.6) to THB 68/ kg ($ 2.2). The price plunge was a result of Vietnam’s ban on live pig imports from Thailand and a forced closure of wet markets across the country to avoid mass gatherings that could spread Covid-19.

Vietnam imposed the ban at the end of May after its local livestock authorities found 980 pigs shipped to the border from Thailand infected with ASF.

Even so, Director General of Thailand’s Department of Livestock Development (DLD), Sorawit Thanito, denied that the country was hit by ASF. He promptly instructed border check points to conduct a test for ASF on every consignment of pigs that are destined for Vietnam.

Apart from the ban, slow demand for pork in the country mainly due to closures of wet markets and suspension of dining in restaurants and bars also affects the price of live pigs.

In the long-term, however, it is expected that the price would soon recover and make a new high in months to come. Fearing the spread of ASF, numerous pig farms in Thailand are liquidating their sows and shipping them out to Myanmar.

Introducing gilts or piglets to the farms can be hardly implemented at the moment. The DLD is taking a tight control on movements of pigs to minimise risks from ASF. Farms at origin and destinations have to prove that they are free from the virus through testing blood samples and surface swabs. The test has to be conducted only by DLD’s own laboratories.

It is estimated that nearly half of Thailand’s one million sows has been made redundant.

According to data from the General Statistics Office as of May 29, 2021, Vietnam’s pig population has increased by 11,8% compared with the same period last year (nhachannuoi.vn).

According to the Department of Livestock Production, in the first quarter of 2021, the country’s total sow herd reached over 2.95 million heads, an increase of over 18.8% compared to January 1, 2020. (nhachannuoi.vn)

After detecting a batch of nearly 1,000 pigs imported from Thailand infected with African Swine Fever (ASF), as of June 30, 2021 Vietnam will suspend any import of live pigs from Thailand.
(nhachannuoi.vn)

Afte five ASF vaccine trials in Vietnam, the vaccine apparently is able to protect 100% of injected pigs, in real life production, this figure is expected to be 80%. The Ministry of Agriculture and Rural Development, if all conditions are favorable, it is expecting that in just a few months, Vietnam will have an ASF vaccine. (nhachannuoi.vn).

The inventory of imported frozen pork in cold storages totalled to 40.95 mil kgs, up by 8.4 mio kgs in the previous month. Prices of key feed raw materials are still on an uptrend.

The Philippines’ headline inflation in May 2021 remained at 4.5 percent, which was the level of inflation of the country since March 2021. The government is trying so hard to push down inflation rate to the target of 3.5 percent by controlling prices of food commodities such as rice, pork and poultry meat. But this seems to be impossible due to the fact that there is still no clear direction on the COVID19 control in the so called NCR Bubble (Metro Manila, Cavite, Laguna, Rizal and Bulacan provinces) which is still under the General Community Quarantine (GCQ). People are still wary of the situation thus spending is low and there is still limited movement of people in these areas.

On May 15, 2021, President Duterte issued an Executive Order (EO 134), setting pork tariffs significantly lower than the original 30 percent in-quota and 40 percent out-quota rates. EO 134 follows considerable pushback by domestic industry and Congress to Executive Order 128, which the President issued on April 7, 2021 and set rates at 5 percentage points lower than EO 134.

The President also issued Executive Order 133 on May 11, 2021, raising the Minimum Access Volume or tariff rate quota of pork imports from 54,210 MT to 254,210 MT. This was in response to the doubling of pork prices, driven by a shortage of pork amid the devastating African swine fever outbreak, which has pushed overall consumer inflation to 4.5 percent in April.

The Eastern Samar provincial veterinary office confirmed reports of African Swine Fever (ASF) in three barangays in Dolores town, the first reported cases in the province. The virus was confirmed in six samples from the town of Dolores.

Authorities are currently implementing the rapid response protocol to contain the outbreak. Culling was conducted already in Japitan village affecting 10 pigs while geotagging is ongoing in the other two villages.

The provincial government has intensified the border checkpoint enforcing the executive order of Governor Ben Evardone for the total ban on entry of live hogs and pork products from Luzon, Mindanao, Leyte, Samar, Northern Samar, and Southern Leyte.

In Eastern Visayas region, ASF infections have been reported in the provinces of Leyte, Northern Samar, and Samar.