The livestock subsector grew by 1.88 percent. It shared 16.67 percent in the total agricultural output. Hog production was up by 2.81 percent.

The Swine Inventory in the Philippines is predicted to reach 12.70 million heads in 2018, this will be the highest level in recent history.

There are a number of new Hog farms being built or planned to start construction in 2019, The businesses that are investing in modern commercial pig production units require genetics that are easy to manage and produce over 30 PWSY, this is an increase of over 40% compared to the current average Philippine farms. Once weaned the piglets need to grow fast with a low cost of gain and produce high quality pork, Genesus meet  all these requirements and more, even in such a hot and humid climate. Genesus is committed to the Philippines and on the 1st October 2018 Pol Capule started to work for Genesus as Business Development Manager for the Philippines

Last week we had a booth at Vietstock, in Ho Chi Minh City there is always a high level of interest in the livestock, aquaculture and meat industry in Vietnam. According to the organisers there was a 50% increase in international visitors, 46 participating countries and 90% of the exhibitors rebooked their stands for Vietstock 2020.  We had several fresh enquires over the 3 days which we are currently following up plus it’s a good place to meet your existing customers, potential customers and friends from within the pig industry.

During this month, the Vietnamese government had a meeting with the 12 biggest pig companies in Vietnam, the Vietnamese government want to put a lid on the liveweight pig price to avoid a vast expansion which will in turn lead to oversupply and avoid illegal imports of pork from China with the risk of ASF. The decision was made to reduce the pig price below 50.000 vnd/kg for the long term good of the pig  industry in Vietnam.

As the ASF continues to spread within China the total number of ASF cases reaches 50.

MARA has lifted bans in total 13 ASF epidemic areas. Anhui and Jiangsu are now considered ASF free. The pig businesses in Vietnam are concerned as ASF in China is moving closer to the Vietnam Boarder but they should not take their eye off their business plan and continue to improve performance and biosecurity, it’s important to maximise your output, for the many that avoid contact with ASF they should enjoy higher pig prices and improved profitability through lack of supply.

In the Vietnamese press they claim Chinese farmers are visiting Cambodia and Laos to rent land and pig farms for pig production.

All the leading pig companies such as CP, CJ Vina, Mavin, Dabaco, Japfa and Masan are focused on establishing a supply chain with 3F (Feed, Farm, Food), this plan also includes having their own slaughter house and meat processing.

Binh Duong province will have a festival of the pig from 27 to 29 December, 2018. Bình Duong is a small province in Southern Vietnam, just north of Ho Chi Minh City, The festival is quite important among Hoa community not only in Binh Duong but also throughout Vietnam (in Ho Chi Minh City, it takes place in China Town)

The Thai pig industry is on a high alert as the African Swine Fever (ASF) has infected pig farms in China’s southern state of Yunnan, which is closer to Thailand’s northern region.

Pig farms across Thailand are setting up double barriers around the premises and prohibit all the strangers and vehicles to get inside.

Thai livestock authorities, meanwhile, announced that any sign of ASF outbreaks has to be reported. Farm owners who are failure to do so could face a jail term and a hefty fine.

Imports of meat and bone meals from countries prone to ASF are banned. Foreign travellers are strictly screened for processed pork products, which are prohibited from carrying into the country.

The authorities will also take this opportunity to make it compulsory for all pig farms in Thailand compliant to a GMP standard.

Meanwhile, the liveweight pig price in Thailand in the fourth quarter remains stable at about THB 65/kg (USD2). It is even showing a downward trend as shipments of live pigs to Cambodia and China are in decline.

Major producers such as Betagro and Thai Foods Group have their commercial pig farming operations certified to be free from antibiotics by NSF, an independent certifying body. Although the transition towards antibiotic-free is crucial to the operations, it boost public perception on safety of their pork products a great deal.

A herd of commercial pigs that is a cross between F1 Danbred (Yorkshire + Landrace) and Genesus’s Duroc terminal boar semen has reached 95kg in only 126 days.  A test at Trang Wattana Farm in southern Thailand has shown that the group sired with Genesus’ Duroc grows faster, has a better feed intake and is healthier.

Test results at the end of the nursery stage are in the table below: 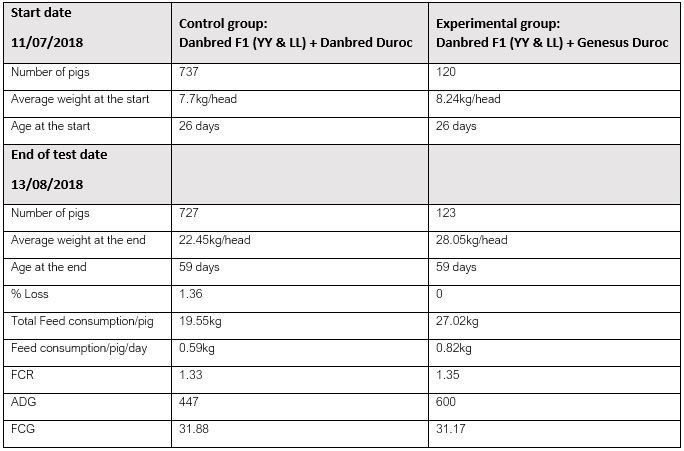 Malaysia lifts part of its embargo on Belgian pork, Malaysia has decided to lift its ban on frozen pork.

Malaysia, one of the 16 countries that have implemented embargo measures on Belgian pork after the detection of an African swine fever outbreak in the south of the province of Luxembourg, has decided to lift its ban on frozen pork, according to the statements of the Federal Minister of Agriculture, Mr Denis Ducarme.

After the detection of the disease, 16 non-European countries suspended their imports of Belgian pig/pork products.

Belgium has 4,039 pig farms and 6.2 million pigs, more than 90% of them are in Flanders, and they generate an invoicing of €1,300 million in exports, most of them (94%) destined to intra-European markets.

During the 18 month pig price crisis in many of the S.E. Asia Countries Vietnam cleared out its stocks of pigs and pig meat and flooded the Cambodian market causing the price to crash from over 2 USD to around 1 USD, many of the local farmers went bankrupt and it’s unlikely they will return to pig farming.

After Vietnamese imports fell over the past few months, pig prices have increased due to the fact that the domestic supply is not enough to meet the market’s demand. Increased demand has pushed up the liveweight pig price to 2.05 USD at the farm.