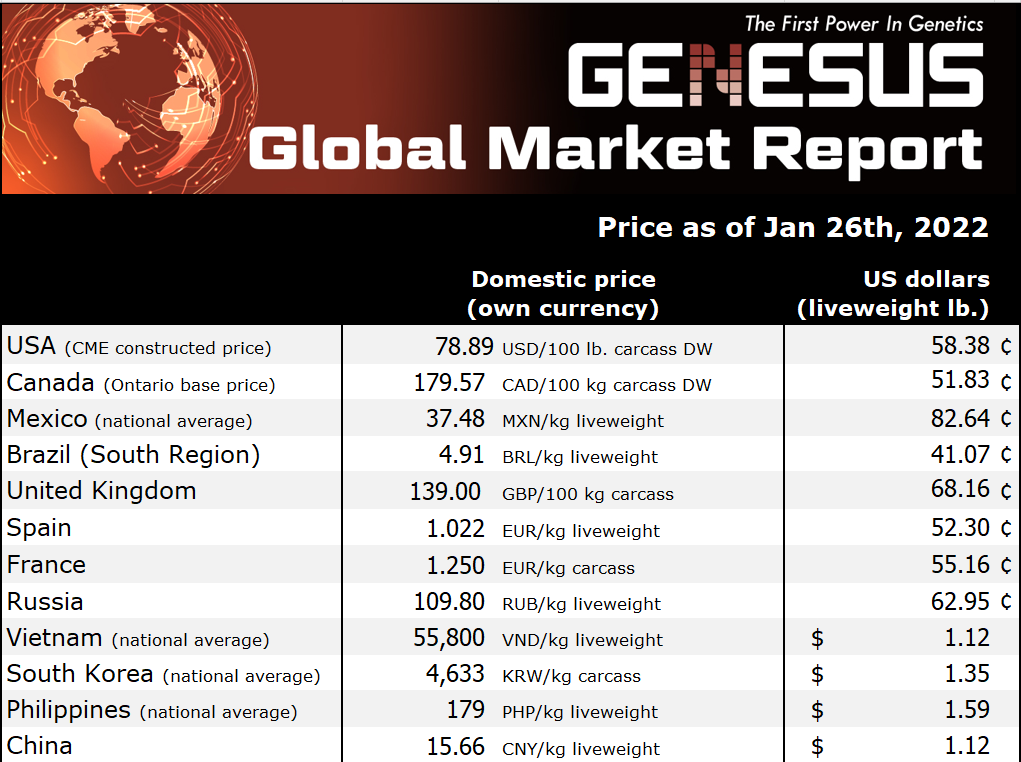 Eleven regions in the Philippines have shown decreases in production and the entire production picture has changed. In previous years, Central Luzon and South Luzon were leaders in pork production. Today, South Luzon is in fourth place with 1.006 million heads while Western Visayas is ranked no.1 with 1.19 million pigs, followed by Central Visayas (1.19 million pigs) and then Northern Mindanao (1.09 million pigs). Central Luzon had the biggest inventory reduction – 52% with a current estimated population of just over half a million pigs. (Source: PSA report)

Despite massive imports, Filipino consumers still prefer to buy local pork over the imported one. Frozen pork inventory as of end 2021 was at 64.07 million kg, up by 93.20% vs same time previous year. The EAT PINOY PORK campaign has seen tremendous success in the last two months of year 2021. This can be seen in the improvement and stabilization of retail pork prices as well as the slowing down of imported pork. (Source: NMIS report)

In the first week of January 2022, there were reports that ASF has spread again in the islands of Visayas and Mindanao. On record, there are four regions with 34 barangays that are officially affected by ASF. The USDA has come out with a prediction that the 2022 pork production will reach 1.025 MT because of the increased repopulation efforts.

Thailand’s Department of Livestock Development (DLD) has admitted that the country is being hit by African Swine Fever (ASF) as massive loss of sows and commercial pigs due to disease is making pork price hike to a level that is unacceptable by consumers.

Pig production is expected to decline by 70%. Thailand normally has 1.2 million sows, producing 30 million commercial pigs per annum. In effect, price of live pigs has jumped 35% from November 2021 to THB 110/kg (USD 3.3) in January 2022. Consequently, pork prices increased to THB 230/kg (USD 6.9) on average, almost doubling the price in November.

Half of meat consumed in Thailand is pork. Worse still, when pork in the food basket is low, it prompts the hike in prices of other animal proteins such as chicken, eggs and fish. This is driving Thailand to the blink of food inflation.

To relieve some of the pressure, DLD conducted floor swaps in early January at abattoirs around Bangkok. It found one out of 308 samples positive to ASF. This let the DLD to announce that Thailand has found ASF, but still insisted that the country was free from the disease prior to that. The announcement is likely to be too late. All pig producers, small or big, in Thailand, are all hit by ASF.

Small and medium-scale farms that have only one production site have to stop raising pigs once hit by the ASF. Only medium and large-scale producers with multiple sites still can continue their business. They can close the affected farms and carry on raising pigs at the other locations that are still free from ASF. Some of them are building up new farms in new locations, but this would take some time to get the pigs out to the market.

Whether raising pigs on existing farms or the new ones, the cost for lack of ASF prevention measures is huge.

A temporary ban on the export of pigs between 6th January 2022 and 5th April 2022 has been imposed to increase the amount of pork available in the Country and lower domestic pork prices. But when the chance to expand the pig herd is limited and time-consuming, the only option for Thailand to cool down the pork price is to import frozen pork from abroad. But this would be achieved at the expense of pig producers who are already facing tremendous risks from ASF and rising feed costs.

According to the Department of Livestock Production, due to the complicated developments of the Covid-19 epidemic, the prices of input materials, especially feed, have already increased by 16-36% and continue to go up, leaving producers worried.

On the good news side, earlier this month, the Department of Animal Health officially signed a cooperation agreement with Dabaco Group to support Dabaco’s research and production of an effective ASF vaccine. Experimental vaccination for pigs has already been carried out on a large scale with successes in research and testing. The results show that the vaccine researched by Dabaco is safe and highly protective. Having now the support from the government, it is expected that in the second quarter of 2022, the African Swine Fever vaccine will be officially approved.

Dabaco is the leading pork producer in Vietnam in terms of modern technology and productivity with a total herd inventory of over 1 million pigs and with solid plans for expansion. Just this month, Dabaco signed a cooperation agreement with TSC (one of Vietnam’s leading agricultural companies) to invest more than 3,000 billion VND (USD 133 million) into expanding its production by another 1 million pigs/year.