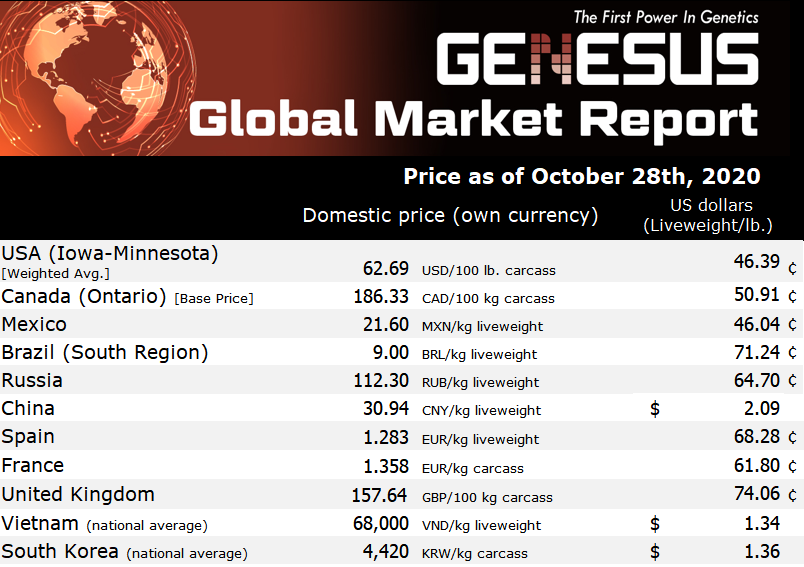 In the pig industry, we have 2 pandemics to deal with ASF & Covid -19. It’s over 7 months since I returned home to the United Kingdom from the Philippines having canceled the rest of my business trip due to travel restrictions, I have been working from my home office all this time and travel may not come any time soon as the number of confirmed cases continues to rise on the 2nd Covid-19 wave.

Most of the Genesus team are used to working from the home office so it was easy to adapt, luckily the local S.E. Asia Genesus team are keeping busy in Vietnam, Myanmar, Philippines, and Thailand and we thank our customers for their acceptance of video calling on the many platforms currently available to get the business done. We are pleased to say Genesus is open for business and we look forward to meeting you face to face again when we can once again travel safely.

Thai pig farmers used to gain $2.8/kg from selling their pigs to exporters in the third quarter of the year when live pig exports from Thailand to Vietnam were at their peak. But the farmers in Thailand are unlikely to reap the windfall in the future as the stock of pigs in Vietnam is being replenished from imports of gilts, piglets, and commercial pigs imported from the country. It is expected that the pig price in Thailand would plunge further until the end of the year or even more.

Domestic pork consumption in the country used to be high at the year-end until the summer is over in May. The rise in pork consumption is a result of foreign tourist arrivals in the northern region of Thailand during the winter from November to February. During the summer from March to May, the number of foreign tourists even increases further as they are moving to seaside resort towns along the Gulf of Thailand and the Andaman Sea in southern Thailand. But at the end of this year and early next year, there is no sign of foreign tourists in the country anymore. Outbreaks of the Covid-19 globally have prompted the government of Thailand to impose a 14-day quarantine for all travelers coming into Thailand.

Although the government is encouraging the Thais to visit tourist attractions across the country by giving free cash for accommodations, ongoing demonstrations against the military government across the country would make this attempt fail. As such, the only way for the Thai pig farmers to survive under this mishap is to focus on productivity, maximise their output and reduce their cost of production, Genesus Genetic is working with many producers to help them achieve this. Also most important maintain strict Bio-security to keep the country free from ASF.

Today, according to the price of Meat Deli (October 26) at VinMart stores and Retail Food Company, market continues to remain stable compared to the end of last week. At VinMart, the price ranges from 139,900 to 270,900 VND/kg (source).

According to Mr.Trong, Vice director of Department of Livestock Production, the recent flooding situation caused the four central provinces of Ha Tinh, Quang Binh, Thua Thien Hue, and Quang Tri to suffer heavy losses in life and property with about 700,000 animals died including 50,000 pigs.

According to summarised data from the Ministry of Agriculture and Rural Development, as of the end of September, the total number of pigs nationwide is about 25.5 million, equivalent to 82% compared to before the African Swine Fever. (source).

So far 43,150 pigs, the equivalent of 2,157 tonnes of meat, have been culled and destroyed in Vietnam in an attempt to stop the ASF virus from spreading. In the last three weeks, outbreaks have been confirmed in 199 villages, and small cities in the provinces of Lang Son, Cao Bang, and Bac Kan, as reported by the Vietnam News Agency, citing sources from Ministry of Agriculture and Rural Development (source).

Currently, pig production businesses have strong profits in Vietnam, with the early completion of business goals. After 9 months, Dabaco’s profit exceeded 1,000 billion VND and exceeded the plan for the whole 2020 year. Mitraco and Dolico same (source).

According to the draft livestock development strategy for the period 2020-2030, vision 2040 of the Ministry of Agriculture and Rural Development, by 2030, the total number of pigs is regularly present at about 29-30 million heads, of which 2.5-2.8 million heads kept as breeding stock. (source).

Below is a map representation of the updated status of cities/municipalities and provinces categorized according to the zoning plan covering new ASF affected areas from September 22nd to October 14th, 2020.

For the detailed “ASF Disease Status as of 14 October 2020 / National Zoning and Movement Plan” click on the image. (source: www.bai.gov.ph)

Located in Paraiso, Tarlac City, the new Regional Animal Disease Diagnostic Laboratory (RADDL) aims to ensure a healthy and resilient animal sector in the region. The laboratory, funded by the United States Defense Threat Reduction Agency (US DTRA) will provide accurate diagnoses of major animal diseases and assist the government in decision-making regarding the prevention of animal disease spread. The modern animal disease laboratory will ultimately help protect the livestock industries in Central Luzon from diseases like ASF and FMD. It will also serve as a training facility for veterinary clinicians, students, and professionals.

According to Agriculture Secretary William Dar, the facility will help improve measures against animal diseases that have often affected provinces in the region. Secretary Dar expressed his hope that the new facility will help put an end to African Swine Fever in the country. At present, there are RADDLs in Region 2, Cebu, Cagayan De Oro, General Santos, and Davao. (source)

The country’s first government-owned “Triple-A” (AAA) slaughterhouse in Tanauan City will start operations in November 2020 and will be expanded to include an additional cold storage and cutting facility. Triple-A slaughterhouses are equipped to be compliant with international standards, so their meat products could be sold and exported.

The PHP 187.2 million ($ 3.87 mill) facility sits on a 1.9-hectare area which was donated and developed by the city local government unit (LGU). The slaughterhouse can process 500 head of hogs per eight-hour shift. It is equipped with a cold chain network consisting of three chilling rooms, two blast freezers, and three cold storage rooms. Also, it has a meat laboratory and wastewater treatment area.

Agriculture Secretary William Dar is committed to expanding the facility by integrating it with a cutting plant, allotting an additional PHP 50 million ($ 1 mill) through the DA-National Meat Inspection Service (NMIS).

“Undoubtedly, the Tanauan ‘AAA’ slaughterhouse will help propel the modernization of the livestock industry in Batangas, and subsequently provide a sustained livelihood, source of income, and affordable, safe, and hygienic meat products to constituents and neighboring communities, including Metro Manila,” said Agriculture Secretary William Dar.

When the facility starts commercial operation, it will be managed on behalf of the DA and Tanauan LGU by the Unified Batangas Swine Producers Association (UniBat). It will collect fees to sustain its operation and maintenance. (source)