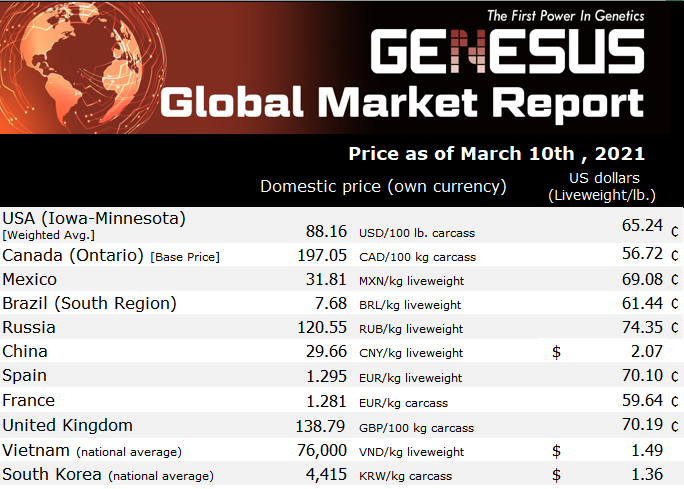 I have asked Bob Lingenfelter to add his thoughts as we are both predicting higher prices. Bob and I have argued about markets for 30 years. Of course, Bob played football for Nebraska and then went on to play for the Browns and the Vikings so I don’t argue too loud. Bob does his daily radio market report then a rap up on Saturday. I follow and pay attention to fundamentals and Bob is a technical analyst. At Christmas, I predicted summer hogs at $100. That fired up Bob. This week he tells me that his charts are showing we will reach $108. At least we both agree to the direction.

I am going to concentrate on fundamental issues why we are heading higher and then I will let Bob add his chart wizardry.

This morning I just read about another ASF outbreak in Sichuan. That is the largest hog-producing province in China. Of course, they say it was found in 38 pigs. My guess is you can add about six ‘zeros to that number of 38. The long and short is ASF is not going away anytime soon in China. Their appetite for pork will have to come from outside China. The U.S. is in a position to take advantage, barring some political event. I have to throw that in as politics can and does dictate market direction.

Jim Long, in his commentaries, has pointed out how many finishing barns are empty. He is correct, in every level of hog production we have empty barns. I work with vets closely and everyone agrees the PRRS and PEDv is as bad as any year in the recent past.

Packers are not as aggressive filling Saturday kills. That is only because they do not want to push markets higher than they have to and keep supplies moving. I had a pig broker tell me he would pay $90 for 40 lb. feeders this week. Pig Brokers are finally having to earn their commission. I bet we see $100 feeder pigs soon. With that being said, below is Bob’s technical input.

Allan and I have talked about markets for many years. Yes, he did see the hog futures coming higher before my computer agreed. The charting program has no feelings, does not care which way the market is headed, unlike most of us farmers that are “bullish” by nature.

Those that move our markets are “funds” or “hedge funds” and for the most part do not know the difference between a gilt and a barrow. Yes, Allan’s fundamentals are what usually determines the ultimate price.

We get another S&D report Tuesday, the one from a month ago continued to call for more pigs this year than last year. We have lower slaughter numbers than a year ago so unless someone knows something I don’t think this seems inaccurate. The cash market has moved strongly higher. My computer programs calls for the trend higher and the next leg higher for the April contract is now $97, my summer contract is looking for a leg that takes us to the $109 area. Is that the high? I do not think so. The last time the gov’t put this much new money in the system, we hit highs in hogs of $133.

With so much of the world having troubles with disease, smaller herds, and feed cost on the rise, I find it hard to believe we will not make a run at those record prices. I would be covering some of my feed cost if I had not already done so. Trend is higher in both the December corn and November beans with next targets of $5.19 and $13.64.