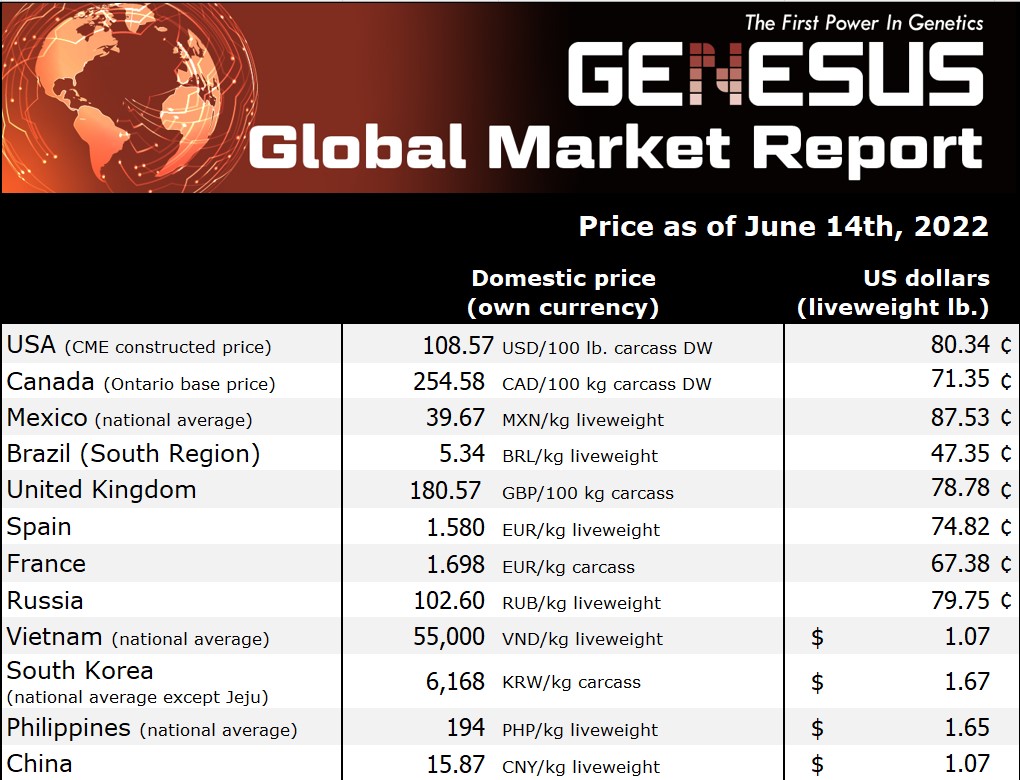 The price in Ontario is higher than what has been experienced by producers over the last couple of years. The problem is the margins are also awful with high feed costs. It seems to be a similar story in much of the world for pork producers currently. With Canada’s inflation the highest it’s been since 1991, challenges continue to be faced by so many. Pork, in comparison to other proteins, hasn’t had the same increase in retail inflation, and this could be beneficial in total pork sold as people look to save some money. Imagine if we had a delicious product for the whole marketplace that kept people coming back to buy more and more instead of just purchasing it cause it’s cheaper!

Quebec’s agreement to reduce 5,000 hogs a week from Ontario coming through its plants has put increased pressure on Ontario producers to find homes for their hogs. With plant capacity in Ontario near or at capacity, these hogs will have to go somewhere. Canada’s export of pork to China was down 67% in Q1 2022 compared to Q1 2021. The US has helped fill this hole by increasing exports of Canadian pork by 56%.

The ideal time for planting has been missed for many parts of the prairies due to poor weather. This has resulted in concerns about potentially lower crop yields. According to a report released earlier this week by Raymond James Financial Inc., farmers in both Canada and the US got off to their slowest start in more than a decade this year due to early-season rain, snow, and flooding. In Manitoba, some farmers haven’t been able to get out onto their land yet. According to the Manitoba government, seeding in the province was only 40% complete as of May 31, compared with the five-year average of 91%. In Saskatchewan, 76% of the crop hectares in the province had been seeded as of May 31, compared with the five-year average of 93%. Many parts of Alberta have faced a different problem so far this spring, with very dry conditions raising concerns for another drought as had been experienced last year.

The silver lining from all of this is pork prices should continue to remain high, with them likely reaching the highest prices in history. There seems to be next to zero expansion in the Canadian pork industry, with high feed prices and record-building costs hindering any real expansion. It will all be about who can survive these turbulent times and come out into a world with less pork and hopefully more room for profitability.