What is the current Market Outlook in China?

There are a lot of confusing circumstances in China’s pork industry at this moment as one only has to take a look at the chart below depicting the evolution of up and down prices. To better understand the marketplace today and where it may be headed in the future, let’s take a quick look back to see where we have been since ASF appeared.

From August 2018 through January 2020, governmental reports showed 43% of pork production was lost. The first ASF wave started in the Northeast and moved to central regions by the spring of 2019. The second wave occurred in the late spring through late fall of 2019 in the southern regions of China and specifically Sichuan. These first two waves occurred in high pig density areas with often poor biosecurity and ineffective control measures. Panic selling flooded the market with pork, so the pig price remained stable for much longer than outside observers expected.

2020 was a year of recovery with massive capital invested into the China pork industry. The government announced a number of programs aimed at rebuilding the pork industry. Untold numbers of investors entered the market to capitalize on high prices and opportunity for huge profits.

Then a third wave came over this past winter, causing significant losses with estimates ranging from 20 to 50%. Many analysts estimate the number to be around 30% weighted mostly in the North and Central, but also some outbreaks occurred in the south.

This wave was complicated by a muted virus less deadly, but harder to identify. It seemed big producers were the most heavily affected since they were aggressively expanding and populating farms with gilts believed to be associated with the vaccine muted virus. Reports are there were some wild strain outbreaks, but limited.

Today’s headlines report a 30% decline in pig price, from 36 RMB/kg ($2.51 US Live weight/lb.) to 23.64 RMB/kg ($1.63 US Live weight/lb.) since January of this year. No doubt this is a big drop, but still above the previous record prior to ASF. Most producers’ cost of production is ranging from 16-17 RMB/kg., so despite the drop producers in China are still making nice profits, and prices are still in record territory. 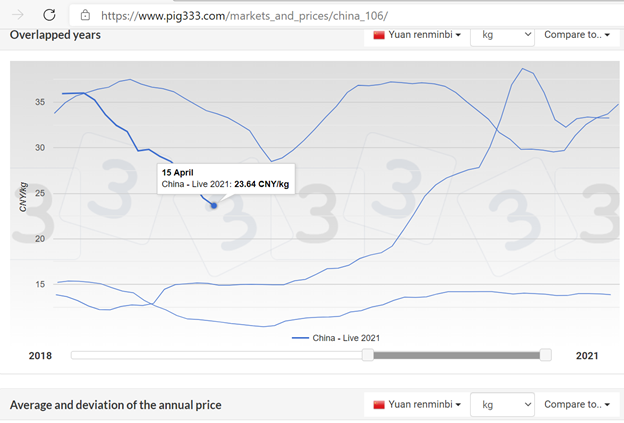 According to the National Bureau of Statistics report, at the end of the first quarter, it reported the pig inventory in China was 415.55 million, an increase of 29.5% year on year. Among them, there were 43.18 million sows, an increase of 27.7% over the same period last year.

What is the short-term outlook going forward?

There seems to be some debate upon the anticipated pig price in the second half of 2021. Some sources say the price will continue to drop as production capacity continues to increase. Other analysts believe the price may spike back up the 3rd or 4th quarter after the surge of pork going to slaughter caused by the most recent wave of ASF and the domestic supply tightens back up again.

We would expect construction of breeding and production farms shall continue driven by high prices and enticing profits.

Perhaps the two biggest challenges will be ongoing disease (not necessarily mortality, but reproductive performance and growth) and poor quality breeding pigs.

We have heard many farms sitting empty again after depopulation, cleanup, and disinfection, waiting for the right time to repopulate.

If we do the math assuming China’s sow inventory prior to ASF was 37 million sows x 0.75 = 27.75 million sows resulting in 10 million sow loss of productivity. Couple that with slower growth and performance – a significant headwind to full recovery.

Fortunately, Genesus is here to help producers restock their breeding farms with the highest quality genetics with Nucleus Source farms registered for export to China from Canada, United Kingdom, and the USA. In addition, Genesus has partnered with a number of companies in China to produce Genesus Brand breeding pigs under Genesus Genetic program and make them available to the domestic market. 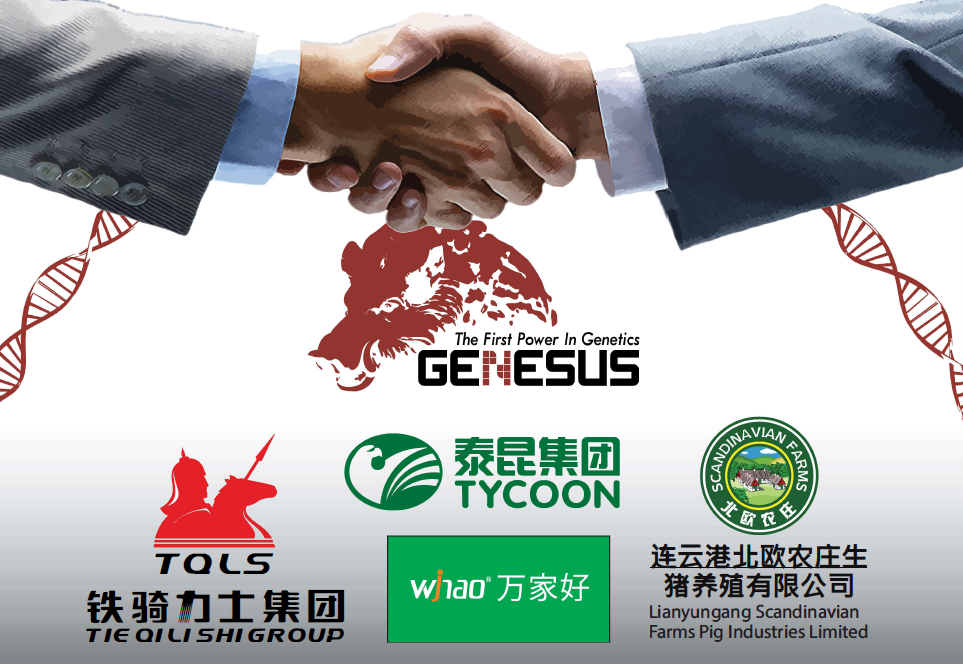