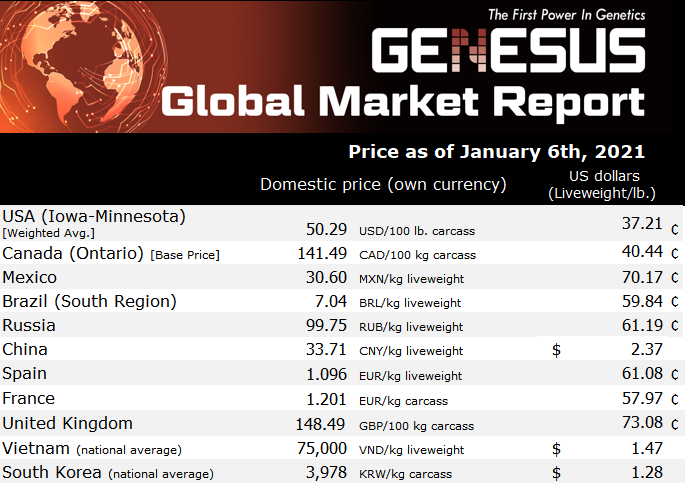 As the world’s largest pig producer and pork consumer, China has ushered in the hog futures trade! On the evening of December 11, the China Securities Regulatory Commission (CSRC) set the launch date of hog futures on January 8, 2021. The Dalian Commodity Exchange released eight documents including the pig futures contract and related rules on Dec 12, 2010, which marked the official launch of the pig futures trade in China.

Pork prices hit an average wholesale carcass price in mid-December of 49.82 yuan/kg compared to 50.99 yuan/kg a year ago.

With Chinese New Year and Spring Festival approaching, demand for Pork is expected to increase as it typically does during the holiday season. We are already seeing pig prices increasing in Sichuan to 36.50 yuan/kg., ($2.54/lb.) and Guangdong Province 38 yuan/kg., ($2.90/lb.) as of January 4, 2021.

To keep pork prices in check, China continues to import record amounts of pork and at the same time release frozen pork reserves. According to a recent announcement, 30,000 tons of frozen pork was auctioned on December 24th. This marks the 37th time since the first of the year with the cumulative volume of frozen pork released 650,000 tons.

High prices are attracting new entrants into the pig business while encouraging expansion by already established companies. The overall investment is amounted to 400 billion RMB ($61.28 billion) in 2020, about 4 times the investment in 2019. The major investors are New Hope, Zhengbang, East Hope and others include Muyuan, Tianbang, Jinjizhining, and Dekang respectively.

There are many commentaries warning about falling hog prices due to overexpansion. We have seen photos of 26 level pig buildings and 80,000 sow farms, as well as read the reports of all the money that has been pouring into the industry. No doubt pig prices will drop, but it is a question of to what level and when. Many factors will be involved, but the Market Price is the key indicator to watch.

What are the factors that will determine when the market returns to normal?

This all means it’s cheaper to import the pork from abroad than to raise it. China may be importing pork for some time, which is good for those pork producers in Iowa and Minnesota. The sooner producers are able to rollover those lower productivity sows and replace them with higher quality genetics, the faster the recovery may be.