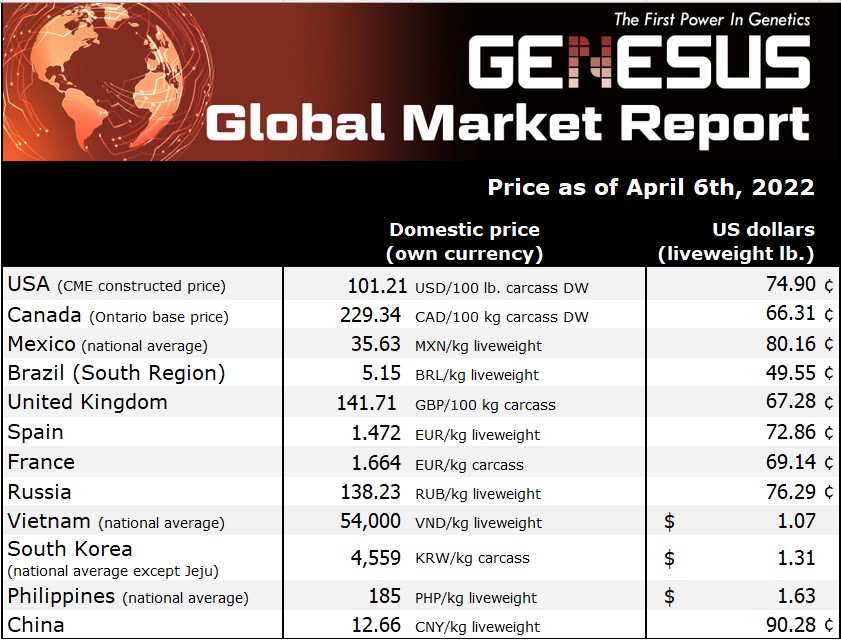 China’s slaughter pig prices appear to have begun its long-awaited recovery. As of April 2nd, the national average pig price was 12.66 RMB ($0.90/lb.), an increase of 9% over the low pig price in March. A further indication that markets are moving in the right direction are feeder pig prices and culled sow prices. Since middle March, China’s popular 15kg (33lb.) weaned pig market has risen by 9% as well to 415 RMB ($65), and culled sows modestly improved to 8.15 RMB/kg ($0.58/lb.).

The cost of raw feed ingredients in China has increased by more than 40% within the three years after the ASF outbreak. While pig prices were soaring, we didn’t hear much complaining from producers as most were enjoying record profits. However, after the sharp drop in pig prices last year, the combination of lower prices and higher input costs have been put a lot of pressure on producers.

There have been as many as 5 price increases announced by feed manufacturers since the first of this year. After the invasion of Ukraine followed by sanctions on Russia, Soybean Meal prices went crazy. As one can see from the chart below Soybean Meal rose 2000 RMB ($312.50) to 5226 RMB ($816) by March 27, only to drop off by April 2nd. Really hard for producers to follow these kinds of gyrations in feed costs.

Producers in China understand that the forces behind the price of pigs and feed ingredient markets are largely out of their control. However, producers do have a choice of the Genetics they use and their nutritional requirements. There is a lot of talk in the industry about adopting feed formulations with lower protein content in an effort to reduce costs. However, for producers still using commercial females retained in their breeding herds, performance is likely only to suffer even greater.

In this time of high feed costs, Genetics that can perform well with a lower cost of feed is an advantage. Genesus pigs have a higher natural appetite and superior growth, so they are able to produce more pork with a lower cost of gain. Genesus has invested for years in developing a pig with better pork quality, lower mortality, and higher income over feed costs. Genesus is the right pig for China, and is the right pig for these times of escalating feed costs wherever in the world.

We believe the surest cure for low prices is low prices and that liquidation of herds has been occurring at some significance since July. Our sources are also telling us there are a lot of farms sitting empty at the moment. We are starting to see public reports such as the chart below, showing significant decreases in the number of pigs going to slaughter since the first of the year. Look for pig prices to continue their upward trend in the second quarter and much improved in the second half of the year.