China’s all-important Spring Festival has just passed and pork producers are looking forward to better times in the Year of the Tiger.

On the last trading day before the holidays, all listed pig enterprises released their performance forecast for the past year. According to the statistics from Xinmu, only 5 of the 18 listed pig companies were profitable in 2021.

ASF has changed the structure of the industry in China. Prior to the outbreak, in August 2018, Wens was ranked #1. However, since 2020, Muyuan has taken over the top spot, with 4 other World Mega Producers: Muyuan, Zhengbang, Wens, and New Hope dominating. In 2021, 7 new companies have taken the place of others who have dropped off the list.

According to www.zhu.com, the production cost of the top listed companies has decreased in 2021, but is still higher (15-22 RMB/kg or $1.07-$1.57/lb.) than the average cost by family farms. Well managed small and medium producers can still compete, but the Mega producers have the advantage of access to capital to survive the times. 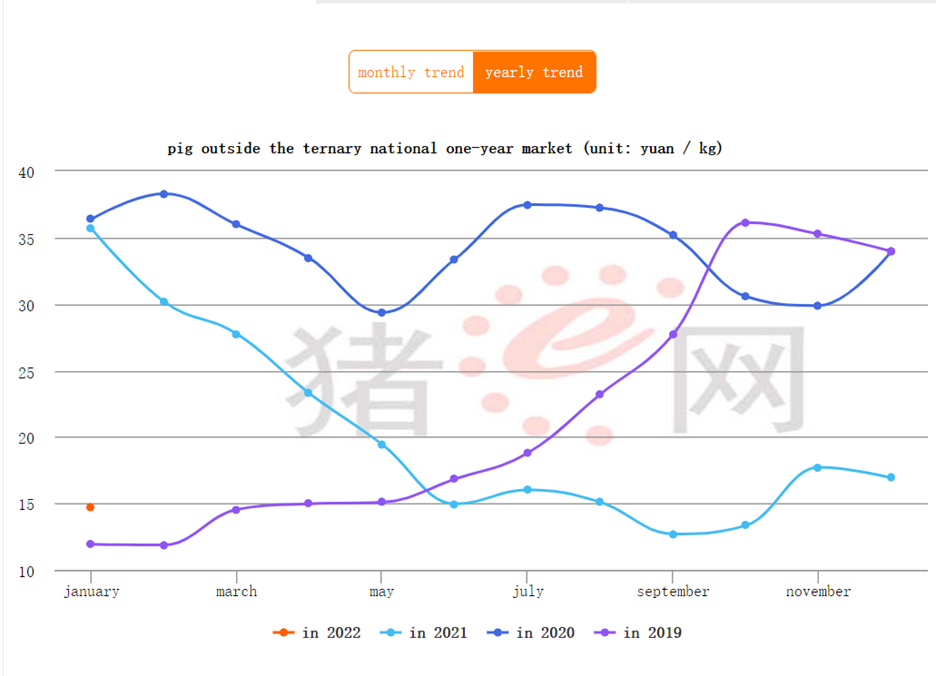 Friday 4 February, the slaughter pig price closed at 14.12 RMB ($1.00/lb.). As the chart indicates, there was a sharp decline in prices in the first half of 2021 and the market has been struggling to recover since. One can see prices were trending upward in October but have flattened. At the same time, 15 kg (33lb) weaned pig prices closed at 395 RMB ($62.25) each.

Most of what one reads suggests prices are not expected to change much in 2022. However, we have a different outlook. We believe all those sows we have been reporting shipped to slaughter starting back in July (and since) will not be producing pigs. Those missed farrowings shall result in fewer pigs going to slaughter. Some say that those sow slaughtering were planned upgrades, but we suspect most were actually due to re-occurring ASF outbreaks and the need to raise cash.

As they say, the surest cure for low prices is low prices. We look for better days in China’s pork industry, with signs of improvement starting in the second quarter.