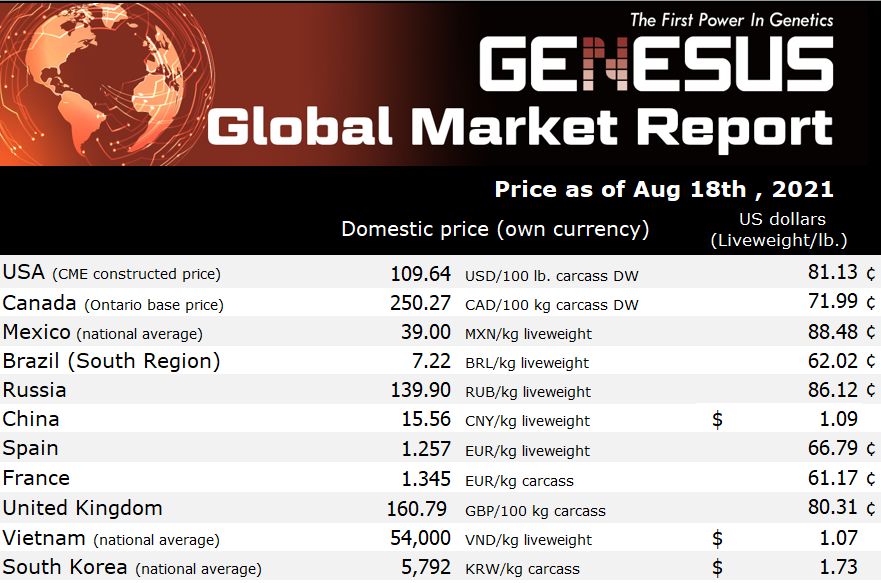 Official reports are that China’s pig production has now fully recovered to pre-ASF levels. According to Ministry of Agriculture and Rural Affairs announcement, sow production numbers through June were reported to be 45.64 million head, up 9.34 million from the same period last year. The number of pigs sold to the market was 337.42 million, an increase of 86.39 million. However, MARA also reported that in July for the first time in 21 consecutive months, the sow inventory actually declined by 0.05%.

The recent expansion by large pig enterprises has apparently created an excess of production capacity within the industry. Some sources are saying 2021 production may reach the 688.63 million of 2017. At the present, there are reported to be 376,500 pig enterprises in China.

Since the beginning of the year, pork prices across the country have fallen sharply, causing widespread concern among producers. Consequently, many companies are re-evaluating their plans and making changes. We have seen companies selling off divisions and making changes to Senior Management.

Costs of production have increased due to high indebtedness from recent expansion, high grain costs, and a tight labor market. Estimates are, producers are losing $35-$50 per head or even more. For any company with one million or 10 million pigs, those kinds of losses cannot be sustained without change or intervention. There will be winners and losers similar to what occurred in the USA in the ’90s when a number of companies kept operating but under different ownership.

Wondering when the pig prices may come out of this downward cycle?

Recently, the executive committee of MARA met to address “pig cycle” fluctuations, and explore mechanisms to stabilize production, including buying up oversupply and putting in reserve. Our reports from the field indicated expansion has definitely slowed and in many cases paused or even stopped.

While the industry is dealing with supply issues and price control measures, Mother Nature and disease are still forces to be reckoned with. The extremely cold winter in parts of the country combined with mutated ASF virus caused large numbers of sows to be culled resulting in decreased production.

Another aftermath, of the mutated virus, were pigs that were slow-growing or pigs slaughtered pre-maturely. Reports said up to 20% more lightweights sold as a result. The combined effect of sows affected by the vaccine rushed to slaughter and early selling of lightweight pigs apparently resulted in an abundance of cheap meat on the marketplace. One can only wonder how much of this is still occurring?

Still, we got anecdotal reports of outbreaks in Sichuan a few weeks ago and just recently in Shandong province. Furthermore, there are new concerns over the burying of dead animals in areas in the middle of China, affected now by the recent floods. If ASF cannot be well controlled, it will continue to negatively affect production in these pig-dense areas.

Other factors may affect price recovery

Since pig prices are down and pork is more affordable, consumption is expected to steadily increase from now until peak season during the Chinese New Year and Spring Festival. Furthermore, urbanization continues as more and more people migrate from rural areas to the cities where education, better jobs, and more disposable income are readily available. This bodes well for strong consumer demand needed to pull low prices upward.

Due to the shortage of breeding animals, many large-scale farms were populated with multi-cross females of low-performance efficiency. When one compiles data from leading public companies, it seems to indicate very low 10-12 PSY production. It is hard to know if these numbers are accurate or simply a reflection of the poor performance of these 3-way, 4-way, and 5-way cross females.

Perhaps as a consequence, we are now seeing producers investing in quality breeding pigs needed to be profitable and survive these challenging times. Fortunately, Genesus has Purebred Registered breeding pigs from recent imports, born and raised in China under our Genetic Program, available for sales into the Domestic Market. Contact us for more information.