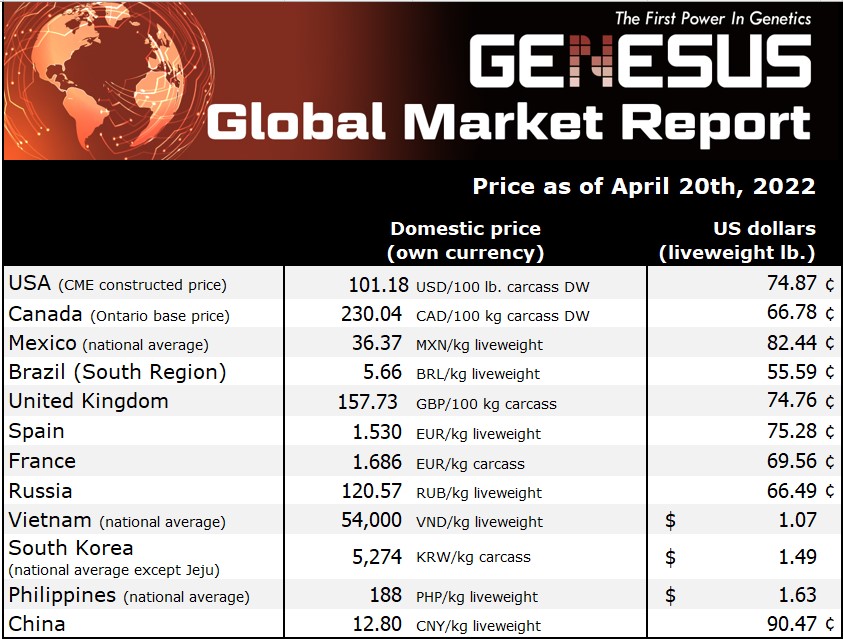 Since our last report six weeks ago, hog market prices increased to a great extent in France.

Marché du Porc Breton (the main hog market in France) recorded maximum increases at many sales sessions. Two sales sessions take place each week at Marché du Porc Breton, on Monday, and on Thursday. A temporary amendment allowing a variation of 10 cents per kilo carcass on Thursday was put in place in March (before this amendment, the weekly variation of the price was fixed at 6 cents per kilo carcass).

Moreover, with the conflict between Russia and Ukraine, the prices of raw materials, fertilizers, and energy have increased. In fact, Ukraine and Russia produce 7 % of world grain production, 15 % of the world’s wheat production, and contribute 30 % of world grain exports.

IFIP (The French Pig Institute) expects a feed price for finisher pigs over 400 € per Ton in the upcoming months. In this situation, a price of 2 € per kg carcass would be welcomed by many producers, so they are able to cover their production costs.

Due to Easter (last Monday was a day off), the demand from packing plants was lower. Carcass weight drop was also lower than expected, with an average carcass weight of 92.20 kg (95.88 kg one year ago).

On March 16, the French Prime Minister presented an economic and social resilience plan to address, among other things, the brutal increases in commodity prices linked to the war in Ukraine.
With the rising feed costs, the French Government will provide 400 million Euros in aid in the next four months for the farms heavily dependent on feed purchases (mainly pig farms and poultry farms). Moreover, faced with rising fuel costs, like all other French people, French farmers will receive a discount of 18 cents per liter of fuel.

We hope this will help pig producers a bit, but the most important is to have a pig price that continues to rise quickly to cover extra feed costs; otherwise, the situation will be critical for many producers.