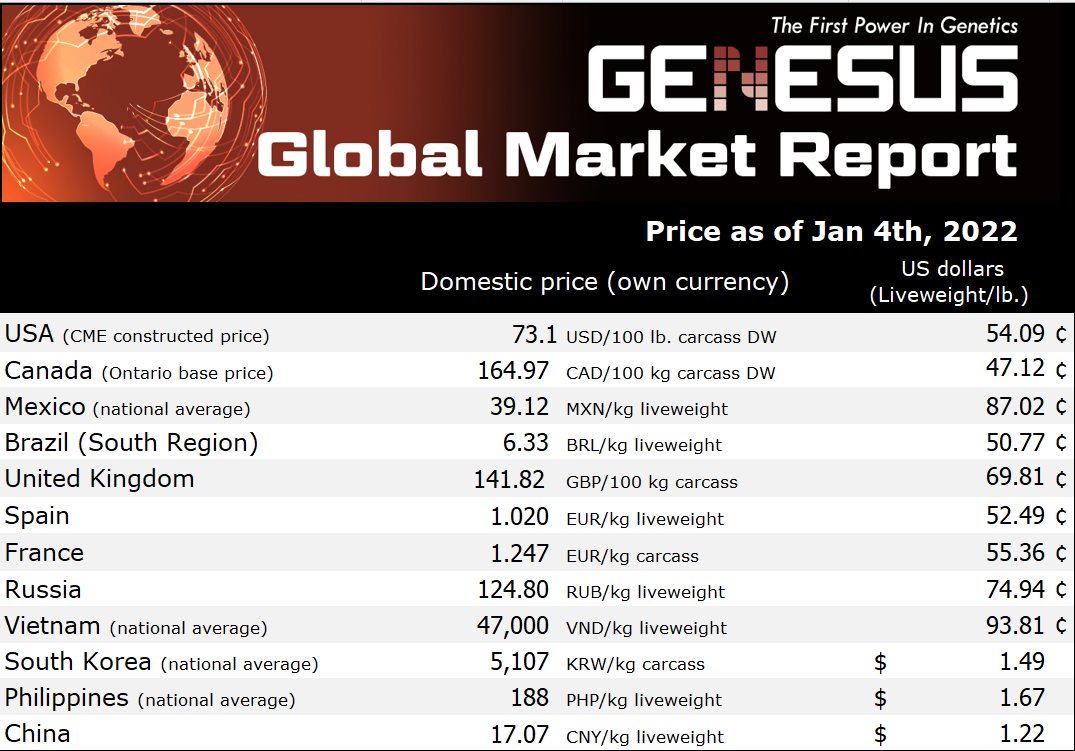 The current price is insufficient to cover production costs that have increased in the last year (especially feed prices).

During the first half of 2021 prices increased and reached up to 1,547 € per kg thanks to the presence of China at the purchases, before its abrupt withdrawal at the end of June. In addition, Spain, a major European exporter, made an unfavorable contribution to the price orientation.

Nevertheless, in the last previous months, there was sow liquidation happening in Europe, China, and the US that will result in fewer pigs produced in 2022 and will have the effect of bouncing hog prices at fairly high levels in many countries including France.

The critical situation for the pig sector in the European Union

On the 12th and 13th of December, the Council of Ministers of Agriculture of the European Union met, and on this occasion the delegation of the Czech Republic supported by France, Austria, Belgium, Bulgaria, Croatia, Estonia, Greece, Hungary, Latvia, Lithuania, Poland, Portugal, and Slovak delegations reported on the critical situation facing the pig sector in Europe.

This note states: « For some time, the EU pig meat industry has been affected by spreading of African Swine Fever and the repercussions of the COVID-19 pandemic. Both of these factors have significantly reduced both consumer demand and export possibilities for EU operators. Further economic pressure is caused by rising prices of energy and of agricultural production inputs such as feedingstuffs. »

It is also mentioned that current hog prices remain 30% lower than in 2017, and are below production costs, threatening the existence of the hog sector in Europe.

Finally, this same note concluded by: « The pig sector in the EU has been in a deep crisis and the EU must react now. In 2016, the situation was also difficult and the EU saved it using specific measures and financial support. Today, we must not let the sector down and we must save it. »

Maybe with this crisis, the European pig industry could consider some solutions, such as perhaps offering consumers more flavourful and marbled pork and thus reboot the consumption of pork?

Maybe it would be possible to consider having more flexible administrative, environmental, and welfare measures (not always the same within Europe) which have the effect of increasing our production costs and losing competitiveness compare to our North American competitors in particular, present on the same global markets as us?

January 1st, 2022, was to mark the end of the castration of piglets in France with a view to «animal welfare». This has been the subject of much debate in recent months.

Some people, mostly producers, were favorable arguing that there would be less castration work and performance of finisher pigs should be better (lower FCR, better daily gain, and leanest carcass), while others people, mostly packers, were not favorable especially for the risk to have boar taint on carcasses.

On November 19th, the French Ministry of Agriculture and Food issued a decree and a technical instruction on this subject. To summarize, it will be possible to continue to castrate pigs if and only if: each male piglet receives at least 5 minutes before castration an analgesic injection and local anesthesia (intratesticular lidocaine). In addition, pig producers and their employees will have to take online training before.

Most of the producers we met following this announcement told us they will spend more time and have more work for castration and at the same time, it will probably increase their production costs (even if they could receive a 2cts premium per kg carcass from the packing plants).

The main question is: will this new measure make the French pig industry more competitive? Not sure.

2021 was not an easy year for French pig producers. We expect 2022 will be better with higher hog prices due to a significant decrease in the number of pigs worldwide.

Happy New Year to all of you, and that 2022 brings you the best.