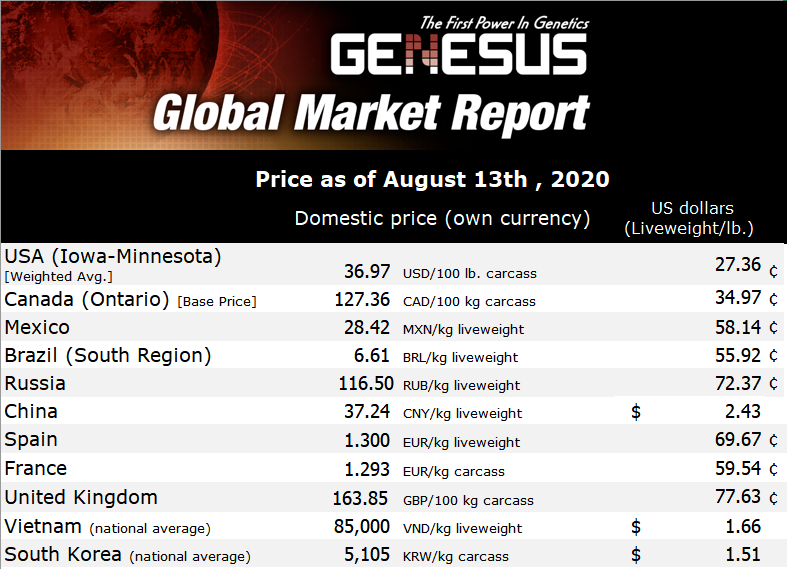 As we have been stated in past reports Mexico’s pork imports have not been as strong as in years past, due to Mexico’s economic slowdown and an unfavorable currency exchange rate.

A slight rebound in pork imports is expected for 2021 due to a greater reopening of the country’s hotel and restaurant industry, which has remained working in mid-gear, if not fully closed, during the current year.

Despite all the negative impact of the market, Mexico’s pork imports increased 9.9 percent in the first quarter of 2020 compared to the same period in 2019, with a 14.7 percent increase from pork imports from the United States.

Pork exports from Mexico to the United States, the third most important export destination, have suffered from much instability so far this year. The volatility of this trade is expected to land on flatter terrain sometime between the third and fourth quarters of 2020.

Mexico has aggressively continued to penetrate the most important Asian markets, achieving so far this year to obtain a significant increase of 19% in its exports with Japan. The Mexican pork industry expects this trend to continue in 2021.

On the other hand, China has become Mexico’s second most important market with 27,280 MT in Mexican pork export to China. As of July 2020, Mexico has only six facilities authorized for pork exports to China, with 14 establishments still pending. Some Mexican packers exporting pork have been able to ship up to two containers (23 MT per container) per day thanks to their vertically integrated production model. Other companies can only send three shipments per week.

Exports to China, Japan, and South Korea will continue to grow consistently as Mexico has focused on private programs to contain the Covid-19 pandemic at the meat packing plant level, while maintaining a good quality of its high-demand products abroad.

The domestic consumption of animal protein has favored an increase in cheaper meats like pork and chicken, at the expense of beef, due to a fall in family income. This is a consequence of job layoffs and the closure of the economy as a result of the onslaught of the coronavirus in the country.

Both the increase in domestic demand and in international markets have produced a constant growth in the national pig herd and in the number of heads slaughtered during the last four years.

Pork prices in Mexico were strongly hit during the months of June and part of July especially, due to the market distortion. In one of the most important pork regions, Central Mexico, prices were around $18-$20 MXN/kg (36 – 40 ₵/lb) liveweight with a cost of production of $24 (49₵/lb), and with a lot of volatility.

Pig prices have since gained ground. Moving up and reaching pre-pandemic values in the range of 27 to 30 Mexican pesos (55 to 60₵/lb) liveweight.

Added to the ravages that COVID-19 has produced in the Mexican territory and as a result of budget cuts in the Mexican national statistics agency, it has become a challenge to access official agricultural information, causing a great detriment to the verifiable data handling.