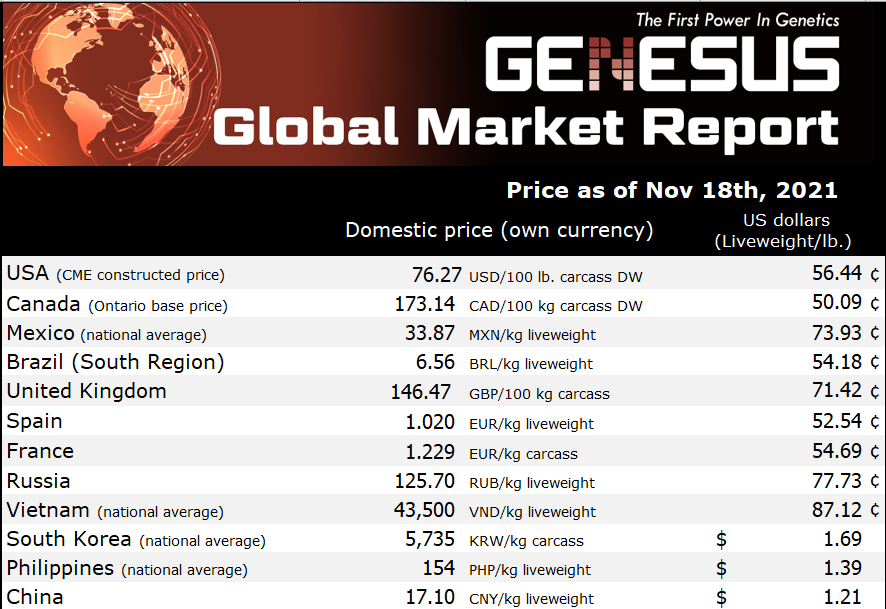 Mexico, like most countries, has also been affected by unprecedented inflation. The price index of the basic food basket increased 8.3 percent last month compared to the same month last year.

Among the causes that have originated the upward behavior in prices is the increase in international prices of inputs, adverse weather factors that propitiate a lower supply of product to commercial channels and higher demand after the recovery in the early Covid-19 post-pandemic period.

In October, the price of the basic food basket in Mexico City rose 8.3 percent annually, the same as in Guadalajara, and in Monterrey it was 8.4 percent.

The kilogram of pork in the national average in October 2020 was 77 pesos and went to 87 pesos, a growth of 12.9 percent, resulting in lower consumption in Mexican households. However, on the other hand, the consumption of pork showed strong demand in the tourist sector of restaurants and hotels thanks to the reactivation in food services.

This has been reflected in the finances of several pork supplier companies. One of them has stated that during the first seven months of the year its business registered a year-on-year increase in its income of 7.6%, totaling 18,343 million pesos (around USD $890 million). While another company in the pork sector indicated that the economic reactivation in restaurants resulted in 55% higher revenue within the category income for “domestic food services”, compared to 2020.

As Ernesto Hermosillo Seyfert, president of the Mexican Meat Council (Comecarne), explained due to the growing demand in restaurants and a rise in the price of pork to the consumer, it was possible for companies to mitigate the increase in the cost of feed.

The growth rate registered in the value of these purchases was more than double, being 57% higher compared to the same period last year, generating purchases by Mexico of the order of 1.2 billion dollars, approaching the record of 1.5 billion dollars. marked in 2017. With these figures, Mexico positioned itself as the main market for US pork, surpassing China, which in the first nine months of the current year imported 619,709 tons because of a 23% drop.

According to the Agricultural Markets Consultant Group, during the first eight months of the year, pork production was 1.09 MT, reflecting a 3.1% increase in tonnage, with a price of $ 2,073 million dollars, which is an increase of 53.2% in its value.

Grains – from January to September 2021, Mexican imports of grains and oilseeds increased 10.6 percent which it is translated in a record of 29.06 million tons to meet the country’s domestic demand. 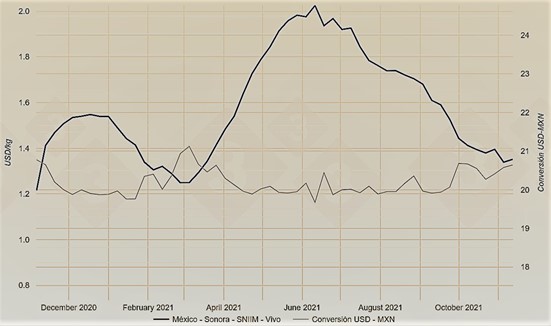 We wanted to bring up one of the Mexican states, Sonora, which is both a producer and exporter of pork, as an example of the Mexican pork market throughout these 10 months of 2021.

The roller coaster of the Mexican pork market has been descending again with a gentle but steady decline. After reaching its peak and setting historic records last summer with prices hovering around USD$ 1.00/lb liveweight, five months later the boards show us a price of 63¢/lb. However, it is still not as depressed as the March bottom of just 56¢/lb.

The good news is that the dynamics of the exchange rate of the Mexican peso against the US dollar has maintained an even behavior throughout the year. This to cushion a bit the costs of imported grain that have moved around 65¢/lb. the cost of pork production in Mexico.

The bottom line of the current market summarized: There are already several producers losing money, some others in breakeven and a few, those who export and supply the large restaurant sector, still making a decent profit.