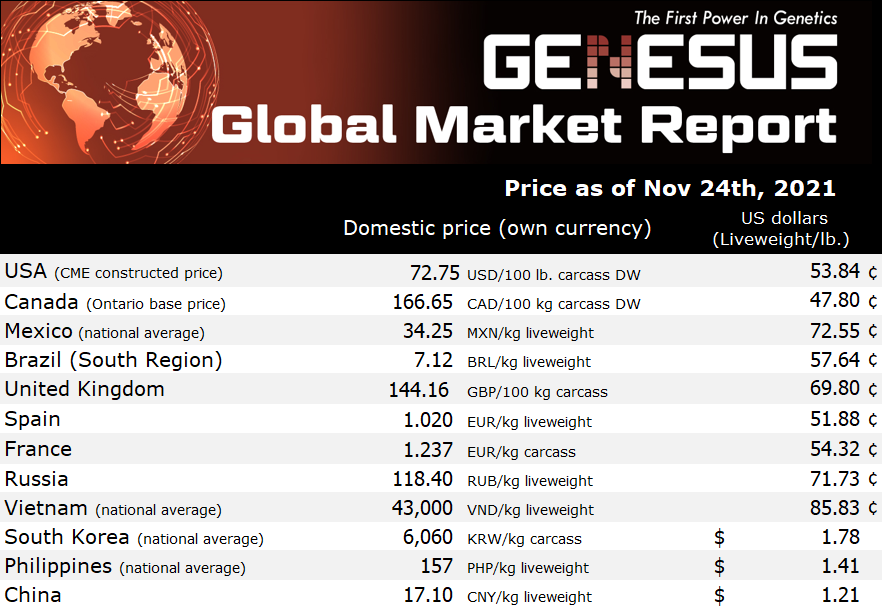 The price of live pigs at the farm gate in Thailand has reached USD 2.5/kg, up from USD 1.8/kg two months ago. This is signaling that a shortage of pork is looming in months to come.

Main reason for the price hike is a mass culling of sows and commercial pigs to prevent the spread of African Swine Fever (ASF). We earlier estimated that 30% of the sows were destroyed or shipped out to neighboring countries, especially Myanmar. But today, the loss of sows could fetch up to 50% or over.

Most important will be the cleaning and disinfection process prior to restocking. Healthy gilts in Thailand are hard to find because most of the breeders are also affected, importing will be the solution. Even when the gilts are available, it is very difficult to get a permit to move the gilts to the farms. The movement of pigs is being tightly controlled to avoid the spread of the disease.

The situation in Thailand now is similar to what happened in Vietnam a year ago. Impacts of ASF in Vietnam last year caused a shortage of gilts and pig price hike in the country. Vietnam alleviated this problem by allowing imports of gilts and commercial pigs from Thailand. This is a solution Thailand cannot afford to do. That is why the effect from ASF in Thailand will be much more severe that what Vietnam was facing earlier.

To tackle this, Thailand needs to restock the farms with high health, high genetic merit breeding stock as fast as possible. For many of the farms, this will create the opportunity to select a robust, high appetite, easy to breed, lower mortality pig, Genesus can deliver on this. Genesus pigs are well proven in the Thai market, Genesus has a large high health status nucleus and multiplication base situated in Canada and the UK, so we don’t expect supply to be an issue for us.

Even so, will take at least a couple of years before the offspring of the young gilt herds reach market weight, until then a shortage of pigs and pork will be inevitable in the country.

The good news is, we learned with time, that ASF in domestic pigs can be controlled effectively with good Biosecurity.

The average price for market hogs is slowly inching its way up despite massive imports. Hog prices bottomed out in the month of October with an average live weight price of 139 PHP per kg (USD 2.76/kg), now 157 PHP per Kg (USD 3.16/kg). Culled sow prices are also on an upward trend.

Though not all areas in the Philippines are experiencing the increase, some island groups down south have steady prices just sufficient for them to earn a few pesos over increasing feed costs.

Recent National Meat Inspection Service (NMIS) data shows that there are 77, 330 MT of imported frozen pork in cold storage in the Philippines (week 46). This number was down from 82,068 MT as of end October. Filipino pork consumers are now favoring local pork vs imported frozen. This is probably the result of intense marketing efforts made by the local hog groups so as to patronize locally produced vs imported. The tag line is “EAT PINOY PORK”.

Just like elsewhere around the globe, the price of feed raw materials are ever-increasing. Corn prices are at an all-time high of 24 PHP per kg (USD 0.48), same with wheat. The price of soybean meal is already at 55 PHP per kg (USD 1.09), coco oil and palm oil is at 85 PHP (USD 1.69). Farmers and nutritionists alike are now using a lot of byproducts and are shifting to a low soy/ high amino-acid/ high energy feed formula just to cope up. It is expected that a January 2022 Argentine soybean meal import will somewhat help in bringing down the formulation cost for the First Quarter of next year.

The Philippine Economy is opening up:
Recently, the government has lowered down Covid19 restrictions in the Philippines. Businesses can now operate “normally”, local travel also can be done across provinces. Tourism being one of the main contributors to the local economy will be allowed too. As the country is “opening up “food consumption is also expected to increase.

ASF Situation
There are known ASF outbreaks presently in key producing areas in Central Luzon still and this involves big producers. Just recently this month, a new outbreak was reported in the province of Marinduque an island south of Luzon.

In an October 2021 article published by the Philippine Daily Inquirer, The DA Chief Dr. William Dar said that previously, in terms of provinces, about 50 provinces had ASF cases, and now it’s only five provinces. Good press release.

A representative of the Dong Nai Breeding Association said both ASF and Covid are still complicated issues the country needs to deal with. To make sure they don’t lose everything farmers are selling light pigs, causing the price to remain low. Even full-grown pigs were only 35,000-40,000 VND/kg. (source)

According to the General Department of Customs, in 10 months of 2021, the import turnover of animal feed and raw materials has reached nearly 4.14 billion USD, up 29% over the same period in 2020 (source).

On November 15th, the Government of Vietnam issued a decree, revising its MFN tariff rates for wheat, corn, and frozen pork. The tariff on wheat has been eliminated, for Corn reduced from 5% to 2% effective December 30th, 2021, while tariff on frozen pork will reduce from 15% to 10% effective July 1st, 2022.