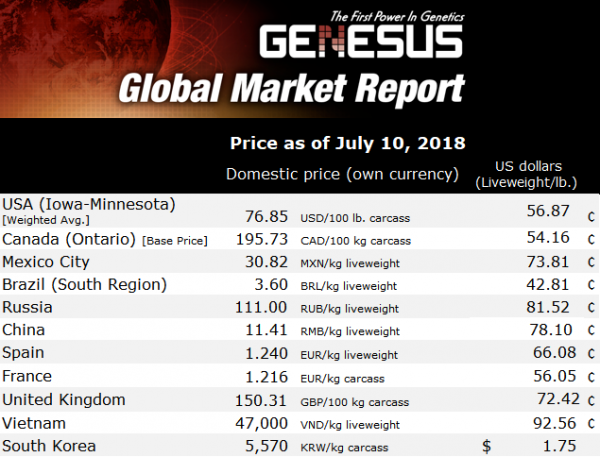 Thai pig farmers are calling for retailers to stop discounting pork price, saying it is misleading the market price.

International retailers operating in Thailand are promoting pork sales through a massive discount aiming to attract housewives and food vendors to their stores.

This is hurting the farmers.  Traders are using the low pork price in the supermarkets to bend the live pig price at the farm gate,” said the Thai Swine Raisers Association.

“Live pigs are being traded at THB 65/kg. Based on this, the price of lean pork should be at THB 120/kg.

“But the retailers are selling different pork cuts at only THB 110/kg on average. So, the traders are taking this advantage to press the live pig price further down,” said an association member.

In response to the association’s complaint, the Commerce Ministry summoned its representatives and the retailers to find a solution. But the talks remained inconclusive.

The Thai pig farmers suffered the loss for nearly two years as the pig price fell below the cost. On average, it costs THB 63 to produce one kilogram of live pigs.

Their attempt to cull sows and piglets since early in the year slowly improved the price to the level that they are starting to gain a slim margin.

But then, the pork discount at supermarkets is impeding their business turnaround.

Piglets from Genesus semen imported from the Genesus partner in Northern Ireland, UK Glenmarshal Sires and born in Thailand

Genesus started delivering Duroc pooled semen to a group of pig farmers in Thailand since February 2018. The move is aimed at observing growth performance and meat quality of the progeny from Genesus Duroc and their existing sows (mainly Yorkshire and Landrace F1 originated from Denmark).

They farrowed in the second week of May and the results showed that:

The live weight pig price is profitable at 46.000 vnd/kg.

Mavin Group became the first business in Vietnam to export fresh pork to a foreign market when the first batch was shipped to Myanmar in late May.

The pork shipment, made in coordination with Sojitz Vietnam, is considered a success of the domestic animal farming sector because this is the first time a company in Vietnam has fulfilled another country’s technical and quality requirements to export pork.

The government of Vietnam continue to push and promote the breeding, growing, finishing of pigs in the 3F system (Feed – Farm – Food) to improve performance, product quality and food safety.

Tan Long group is also following the government promoted supply chain like 3F (Feed – Farm – Food) and they have commenced the building of a farm in Myanmar.

So now we see a lot companies are following the advice of the Government to make a supply chain like 3F: CP group, Masan group, Hoa Phat group, Tan Long group, Japfa group, Green feed, CJ Vina, Dabaco. And they will focus on food safety.

Total swine population was 1.42 percent higher compared with previous year’s inventory. Stocks in backyard farms decreased by 0.33 percent. However, stocks in commercial farms increased by 4.73 percent compared to their 2017 levels.

Approximately 65 percent of the world’s pig population is concentrated in Asia and with an increasing demand for pork and pork products in the region, the socio-economic impact of swine diseases is higher than ever before.

Thursday 5 July 2018. – The Food and Agriculture Organization of the United Nations (FAO) has entered into a three-way partnership with China and five other countries in Southeast Asia to limit the spread of trans-boundary animal diseases (TADs).

Veterinary institutes and animal health authorities from Cambodia, Lao PDR, Myanmar, Thailand and Viet Nam will work alongside Chinese experts and specialists from FAO to improve mechanisms and develop capacity to manage animal movements along the borders. It’s expected this will lead to safer trade, will reduce the risk of new diseases developing and inhibit the spread of existing ones.

Southeast Asian countries including those in the Greater Mekong Subregion (GMS) have similar climatic conditions and socio-economic factors. They continue to report outbreaks of significant transboundary animal diseases including those with high economic impacts such as Foot and Mouth Disease (FMD) and swine diseases, including Porcine Respiratory and Reproductive Syndrome (PRRS) and Classical Swine Fever (CSF). These diseases and their spread, particularly from FMD, have amounted to billions of dollars in losses annually for the region.

Approximately 65 percent of the world’s pig population is concentrated in Asia and with an increasing demand for pork and pork products in the region, the socio-economic impact of swine diseases is higher than ever before.

Asia’s demand for meat, fish and other high protein foods is expected to continue growing in the years ahead. Increasing supply, however, also increases the disease risks associated with the cross-border trade of livestock. This creates a strong business case for the implementation of effective FMD controls.

In one study, the benefits of an effective FMD control and eradication programme in Southeast Asia were estimated to exceed US$ 70 million.

“There is clearly a need to move forward with increased TAD controls in this region, and FAO is very pleased to be working with China and the GMS countries to help control the spread of transboundary animal diseases,” said Kundhavi Kadiresan, FAO Assistant Director-General and Regional Representative for Asia and the Pacific. “China is a world-leader in implementing South-South projects and is a strong partner of FAO in leveraging South-South relationships to help lead us to a more food secure and safer world,” Kadiresan added following the launch.

China is the biggest contributor to FAO’s South-South Cooperation programme with a trust fund of US$ 80 million.

The new project, valued at roughly US$ 3 million, will involve the Ministries of Agriculture from China and the other five GMS countries. The work will include a programme of vaccination, animal movement control, quarantine, public awareness campaigns, enhanced surveillance and reporting and coordination among trading partners.

FAO’s role in the triangular process will be to provide technical expertise from its regional teams in the Emergency Centre for Transboundary Animal Diseases (ECTAD).