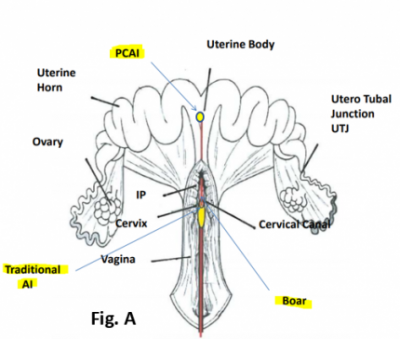 No matter what catheter you use PCAI (Post Cervical AI) or Traditional AI (foam or spiral catheter) the reproduction success has different pieces to the puzzle.

Heat detection and proper boar exposure with adequate energy and protein levels in the feed especially at lactation is a must. Good quality semen and above average stockman ship is also required with both applications.

PCAI is not a new technology it has been around for several years, what is different from the lack of success in the past is the boar exposure. In the past PCAI was treated like traditional insemination with boar exposure at time of depositing semen. Has been observed that greater fertility can be achieved when heat detection is done 45-60 minutes prior to breeding, and at this time without boar exposure. PCAI can be done this way do to the fact the sow doesn’t draw the semen in, the technician squeezes the tube or flat pack into the uterine body.

The difference between PCAI and Traditional is in the placement of insemination. (Fig A)

The boar and traditional AI have the same placement (IP) of the semen; while, with post cervical insemination semen is deposited in the uterine body (UT)

The main reason PCAI was introduced, a few years back, was have a wider availability to semen from higher indexing boars, due to using less sperm cells for each insemination. PCAI also saves labor costs but in turn has increased insemination consumables. This may be advantageous for farms that have a challenge finding reliable labor.

Conclusions:
Tonnage per sow as Genesus has been saying for years is what it boils down to.

Table 2 shows a fertlity decrease when you bring your levels below 2 billion in sperm cells. Other factors include semen quality, timing of insemination and the longevity of the sperm cells in vitro plus many more such as nutrition, air quality and so on.

My thoughts are that a commercial farm should have above average fertlity results prior to changing from traditional AI to PCAI.

• The Post cervical technique is not to be used as a method to improve fertility on farms that are challanged in the breeding department.

• For the farms that have already an above average fertility performance, PCAI should not decrese fertility

• PCAI may help producers with labour issues, by shortening signuficantely the breeding procces

• PCAI will also increase rod cost 3 to 8 times  – but no other significant cost should occur.