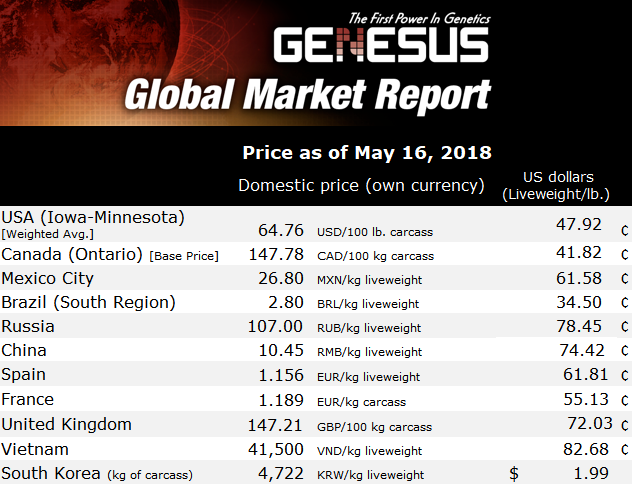 The liveweight pig price has risen very quick and finally returned to profitable trading for most commercial pig producers following the last 15 months of huge losses, up to USD 70.00 per head. With losses like this it is no surprise to hear of the massive reduction in the Vietnamese sow herd of over 800,000 sows since the Ministry of Agriculture and Rural Development (MARD) 2017 figures were released. This has a knock on effect to all the pig farm suppliers of products such as Feed, Animal Health and Genetics, we hear of some feed mill operators have been offering new product lines for other species such as fish and Shrimp in an effort to make up the tonnage shortfall.

Even with the higher pig prices in Vietnam it is unlikely that the pig farmers who depopulated will restock, especially the back yard pig farmers because with exports less than 1% of its total production they don’t have confidence in the long term return of these profitable pig prices. Plus the government has implemented some controls to minimise potential expansion unless linked to suitable supply chain. According to Mr. Van, Head Department of livestock production: The pig business will be focus more on the slaughter house and meat processing businesses like Masan, Dabaco, CP and the many others that are now trying to enter the supply chain system. These supply chains will offer the Improvement in the quality and safety of Vietnamese pork which are crucial if the country’s vision of becoming a major exporter of pork is to be realised. The announcement by the Ministry of Agriculture and Rural Development (MARD) of the establishment of a disease free zone for pig meat production with traceability and a closed production chain to meet the requirements of international buyers will help promote the export of pigmeat products.

Vietnam has a lot to offer and is potentially one of the best Countries in ASEAN with strong GDP growth as seen in the 1st quarter of 2018 at 7.4%.

Under this situation, the association said about 20% of pig farmers in Thailand have left the business. They could not stand such a big loss. Live pig supplies in Thailand has decreased significantly after the industry cutting the population of sows and piglets since January. Even so, the traders declined to buy the pigs from farmers at the announced price. This signifies that the pig traders still remain influential in the price determination.

Meanwhile, the Thai pig industry is under pressure from the US, which is pushing Thailand to import its pork. Lately, the National Pork Producers Council has proposed the US Trade Representative (USTR) to cut GSP (Generalized System of Preferences) for Thai goods imports to the US. The move is aimed at retaliating Thailand, which bans pork imports from the US.  The ban is made on the ground that US pork contains ‘ractopamine.’ It is a lean meat stimulant that is illegal for use in pig feeds in Thailand. Even so, it is expected that the US would Thailand harder to accept its pork. Trade disputes between the US and China is likely to create a huge surplus of pork in the world market. To counter the US in curbing its exports, China has imposed a ban on US pork imports. As China is the biggest market for US pork exports, this would lead to a sharp fall in pork price in the US. This explains why the US National Pork Producers Council is asking the USTR to consider cutting GSP for Thai goods imports.

The limited pig supply in the market plus some of the big farms being hit by PED and other respiratory problems has helped to maintain the high pig prices. 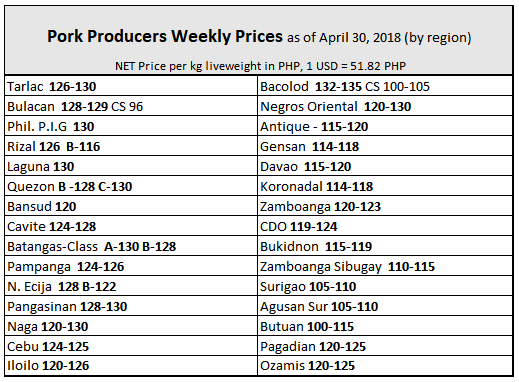 Forecast for the year  2018 indicate that pig production may likely increase by 4.28% compared in 2017, this will now depend on the farms that were hit by PED and other respiratory problems which started in January this year. Farm gate prices of pigs remained stable in the past 3 months, high prices are expected to continue until June 2018 due to limited supply in the market.   Cost of production ranges from P90-P96/kl. The feed price offered by commercial feed manufacturers is increasing slightly.