Host Genetics of the Enteric Microbiome and Disease Resilience

Profitability is driven by many different components of swine production. It has been suggested that the number of full value pigs sold out of pig operations may be the largest factor affecting profitability (Boyd, 2012).

Pig mortality is a big contributor to the number of pigs sold, and pig disease plays a major role in not only pig mortality, but pig quality as well. Additional research agrees that diseases in swine production continue to reduce output and reduce profitability (VanderWaal and Deen, 2018).

Treatments are expensive and vaccines are not 100% effective. It would then seem beneficial for pigs to possess higher genetic merit for resilience to disease challenges, by being impacted less, or by recovering more quickly from infection caused by disease. The economic impact of disease is high (Cornelison et al., 2018), and introducing metrics for resilience into the pig breeding goal will increase producer profit.

An opportunity to impact disease resilience lies in studying the microbial community of the porcine enteric system, also referred to as the porcine gut microbiome. As reviewed by Kamada and colleagues (2013), an intricate network of beneficial relationships exists between the enteric microbiome, the pig itself, and the enteric environment. This network has only begun to be explored.

Exterior factors can affect the type and size of microbial populations present, and those factors can alter the fitness of any one of them if relationships become imbalanced. For example, altered nutrition and antibiotic administration can upset the microbial network and can lead to intestinal colonization by harmful pathogens in an environment that was once balanced by beneficial bacteria. Therefore, further understanding of how microorganisms contribute to the health and well-being of the pig is helpful in combating disease challenges.

One area of interest related to the microbiome is quantifying host (pig’s) genetic control over the composition of the microbiome and identifying relationships between composition and disease resilience. Previous studies have identified variation among the type and abundance of bacteria present:

Taken together, these findings suggest the potential importance of the microbiome in shaping phenotypes and a host (pig’s) genetic role in microbiome composition. 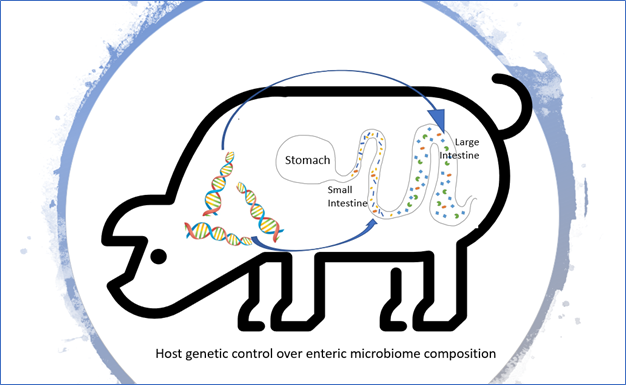 With evidence of host genetics playing a role in the composition of enteric microbial populations, a relevant next step is to consider genetic selection for microbiome composition favorable toward porcine health and productivity.

There is early evidence for immunity traits measured from blood composition, to be genetically correlated with the type of microbiota present (Estelle et al., 2014).

The microbiome has also been implicated in affecting vaccine response efficiency. Individual genetic variation has been documented in human and mouse populations, as well as between human populations segregated geographically (Lynn and Pulendran 2017). A recent porcine example also hypothesized the influence of the gut microbiome on vaccine efficacy (Munyaka et al., 2020), where they confirmed a phenotypic relationship when linking Mycoplasma hyopneumoniae vaccine response to pre-vaccination microbiome composition. In their findings, the abundance of certain genus types could better predict vaccine outcomes than others.

Genesus joined in this search through its involvement in a 2014 Genome Canada Large Scale Applied Research Project. Regarding microbiome research to date, microbiome measures on young pigs could potentially predict their vaccine response outcomes – that subsequently relate to immunity and potential disease susceptibility.