Coming up to the holidays is usually never a good time for hog producers. Shortened work weeks at slaughter plants always give more leverage to packers. The best part of holidays for swine producers? They come then go!

Appears to us that U.S. Pork Exports to China, Japan and South Korea have all increased since Germany was banned from exporting to these countries due to ASF. Our Farmers Arithmetic has a gain of 5,000-10,000 tonnes a week in the three countries since end of September. This is about 100,000 – 200,000 head a week. Probably the major reason the U.S. hog price is higher than last year and significantly higher than lean hog futures indicated in August. This boost in exports should continue into 2021.

There is always disease in our industry. It appears to us there is more than usual. Both PRRS and PED appear to be hitting hard. We heard of several sow units with PED and PRRS. This is cutting supply. There hasn’t been much PED in sows the last couple years. This development will cut hog supply further in the summer months.

This past week as an indicator of supply-demand we heard of a sow producer rejecting cash $60 early wean bids as not high enough. 5 months ago they were $5. Not a business for the faint-hearted. As the saying goes “The surest cure for low prices, is low prices”.

There is a myth in our industry that it is more expensive to produce dark red, high marbled pork.
We all know that consumers pay more for pork with marbling. We only need to look at the wholesale pork cut-outs, where Bellies and Ribs are the most expensive- both products with more levels of fat. They have taste and people pay for it.

As corn-soybean prices have increased rapidly over the last while so has the cost of producing hogs. Made us look at Genesus customers cost of feed versus our competitors. We thought it reasonable to compare our rations to PIC guidelines- the world’s largest Genetic Company. What we discovered was that Genesus recommended finisher rations at current ingredient prices are $16.06 per ton less expensive then PIC’s current guidelines.

So much for it’s more expensive to produce more redder-marbled pork. $16.06 per ton is a lot of money in an industry that chases dollar bills to cut costs. We all can multiple our finisher tonnage by $16.06. It’s a lot of money.

We show our calculations below- compare and decide. 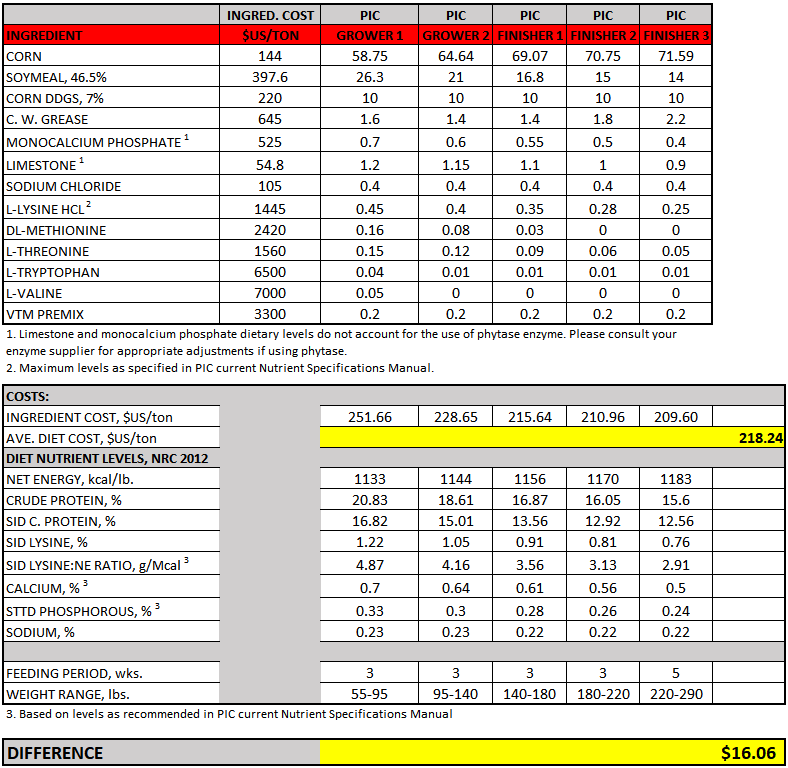