A month ago, the U.S. hog price had crawled up from the low 40’s to reach 57¢ lean a lb. If we had written we expected 53-54% lean hogs to be 76.52¢ lb. on October 1 we would have been declared even more insane then some thought already. So, despite the ludicrous ramblings of the chicken little economists and the bizarre USDA Inventory Report that says there are 10% more hogs over 180 lbs. We have 53-54% hogs 76.52¢ lb. a year ago they were 57.84¢ lb. That is a $40 per head increase in a month and year over year. We never believed there were hogs backed up but we in our wildest dreams never expected lean hogs to be so high on the first of October. “The best things happen unexpectedly!” For all of us who own hogs, it didn’t come anytime too soon.

USDA had breeding inventory increase June 1st to September 1st. This despite 110,000 more sows slaughtered in the quarter year over year. Gilt sales we can attest have been affected by the chaos of the market. Find a new sow barn stocked last quarter? The idea the U.S. expanded the breeding inventory in the quarter is ludicrous. It makes as much sense as the chicken little economists that predicted in mid-August the U.S. would produce more hogs in 2021 than 2020.

Small Pig Cash prices continue to recover. USDA cash early weans at $29 and 40 lb. feeder pigs at $40 are much better to the $3 to $10 per head they were. Currently, $40 feeder pigs are now at a year ago and three-year average at this date. We expect prices to continually increase over the coming weeks as supply decline and demand increases. Many finishers are benefiting from the $23 per head USDA payment for coronavirus support. One finisher who bought feeder pigs for $12 a head told us last week they are going to market with a $100 per head profit with the government $23 included. He took a risk and made a profit.

Does this sound familiar – last week the German pig industry asked for government action to increase slaughter capacity. Covid-19 plant restrictions and ASF have caused havoc. At current slaughter levels, there are 50,000 extra hogs not being handled. Feeder pig prices have been cut in half severely impacting Danish and Dutch producers who sell to Germany. Slaughter hog prices have declined to 1.27 Euro a kg which is below cost of production with now over 30 ASF findings in Germany the loss of Asian export markets will be in all likelihood more than 2 years.

USDA cut-outs hit $1.00 a lb. last Thursday morning. Germany’s loss of Asian markets appears to us to be underpinning U.S. pork and hog prices. It’s not just China, but Japan, Korea, Philippines, Vietnam that the U.S. and Canada will benefit from Germany’s misery. With lean hogs in the 70’s in October, solid domestic and export demand, liquidation cutting numbers into 2021. Why can’t we believe lean hogs won’t blow by the 80¢ they are now on lean hog futures next summer. 90¢ – $1.00 is not an unreasonable destination. Hope so – we all need to backfill the hole created over the last while.

The productivity of the world sow herds continues to increase. As the Global Genetic Industry consolidates to four main Genetic Groups – PIC, Topigs-Norsvin, The Danish groups and Genesus, the technology we have brought collectively to bear has pushed not only competitors out of the way but increased litter size. IE USDA report from Dec quarter 2018 – 10.58 litter to June 2020 – 11.04 pig per litter. Below is a comparison of Genesus – Pig Champ database total 365 herds. As you can see by results below Genesus not only has more pigs, heavier pigs but significantly lower sow mortality. Unlike European Genetics the robust structure of Genesus sows keeps them in production and brings full sow salvage value while delivering high productivity. All add up to why Genesus has a world-leading female to maximize productivity and profit. 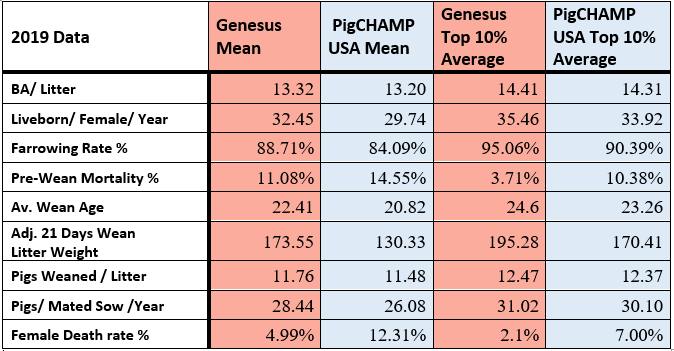