Last week there was chatter about pork demand. The bears attacked the market. When the dust settled Friday, U.S. pork cut-outs were still over 80₵. The market held – a positive sign.

We expect over the coming weeks pork cut-outs will push higher supported by steady demand domestically and internationally as hog numbers decline.

We have struggled in North America to grow pork domestic consumption. This is not the tale for the world as a whole recently. Below is a graph eFeedLink prepared using USDA data. You can see the recent jump of 4.5%. Good news; we are producing a product that global consumers demand. 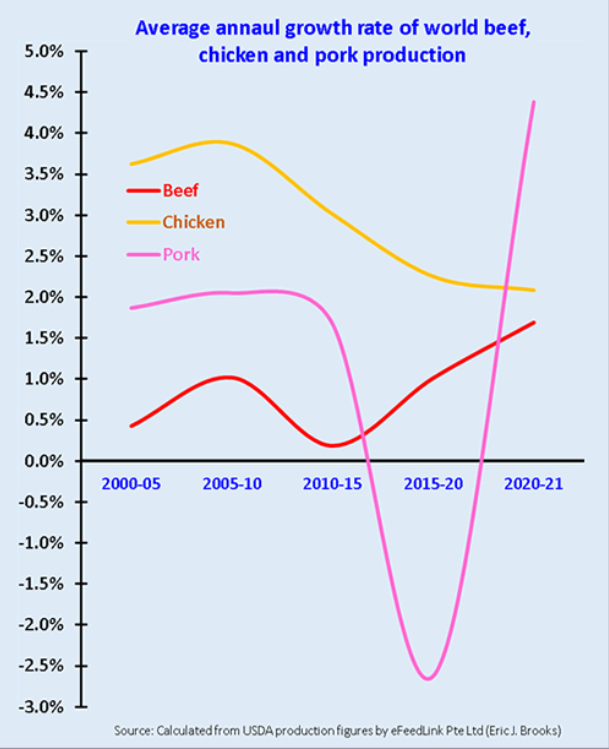 A factor in the international pork trade is the exchange rate. Currently, the U.S. Dollar is 1.21 to the Euro. In mid-March last year it was 1.07. A deviation of 13% over the time frame.

Observation: Pork meat of $1.00 lb. for an importing country in March compared to a Euro Pork Import would now be 87₵ lb.

The devaluation of the U.S. dollar is helping make U.S. pork more competitive in importing countries compared to E.U. pork. This has also contributed on top of ASF and Covid issues leading to lower hog prices in Europe.

The hog price has declined 30%. When you rely on pork exports like Europe and USA, currency rates matter as do other issues like disease and market access.

Give the NPPC credit, they are consistent in their push for Gene-Editing-GMO for swine.

The National Pork Producers Council is continuing its campaign in support of a proposal to transfer regulatory oversight of gene-edited livestock to USDA.

The trade group on Thursday lashed out at Food and Drug Administration Commissioner Stephen Hahn for reportedly saying he’d “refuse to sign the memorandum of understanding between the FDA and USDA addressing gene-edited livestock.”

Hahn reportedly told the U.S. Department of Health and Human Services he won’t sign onto the proposed switch of regulatory power over genetically engineered agricultural animals, currently under the purview of the FDA.

Discussions on the matter between HHS, FDA, USDA and the White House are ongoing.

First reported late Tuesday by Politico, Hahn is said to be questioning the legality and possible health ramifications of potentially relaxed oversight of some genetically altered products.

“We are disappointed that the FDA continues to engage in delay tactics that are holding back U.S. agriculture,” sated NPPC President Howard “A.V.” Roth. “FDA regulation will result in an impractical, lengthy and expensive approval process,” added Roth, a Wisconsin hog farmer.

U.S. Secretary of Agriculture Sonny Perdue in December solicited public comment on the potential transfer that would instead have USDA overseeing genetically engineered agricultural animals.

The NPPC praised Perdue’s move at the time, noting it had been an advocate for the USDA regulatory oversight even as the FDA claimed jurisdiction.

The trade group contends the cost and time it takes for FDA approval of the emerging technology is prohibitive, and that China, Brazil and Canada are pulling ahead of the U.S.

We wrote last week our concerns about what Gene-Editing-GMO could possibly do to pork demand.

We had some dialogue last week with an Elected Pork Official. One question we asked – Has NPPC done survey of consumers, packers, retailers? As we quoted the McDonald Vice-president last week “Don’t expect us to explain Gene Editing-GMO”

We wonder what Packer-Retailer-Food Service Company will be interested to defend-justify Gene Editing-GMO to consumers. Their main interest is to protect their brand, and markets. To be even more cynical – why does a retailer care about PRRS resistance?

Playing defense telling parents that the product won’t harm their children, is maybe a bridge too far. You need only to look at Improvest – a legal product that is being only used slightly in our industry because; we suspect, fear of consumer backlash. It’s a top-secret usage that no one who uses trumpets to their consumers. Why? The same McDonalds executive at NPIC, called Improvest “Chemical castration” and included that in “Don’t expect us to explain.”

One other observation – if USDA couldn’t get oversight from FDA in Trump Administration, we doubt it will get easier with new Government.

Finally – we had nice conversation with Pork Official. Their prospective is from a science perspective. We appreciated that. Ours is from a marketing perspective – if you produce pork that is Gene Edited-GMO and we get push back from consumers or export markets.

Where is the win when it leads to lower hog prices? Can we afford the risk? We believe that NPPC-NPB should focus on ways to encourage not risk pork per capita consumption domestically. Taste is the first point consumers recognise. We see in pork cut-outs where Bellies-Ribs with more marbling are highest priced.