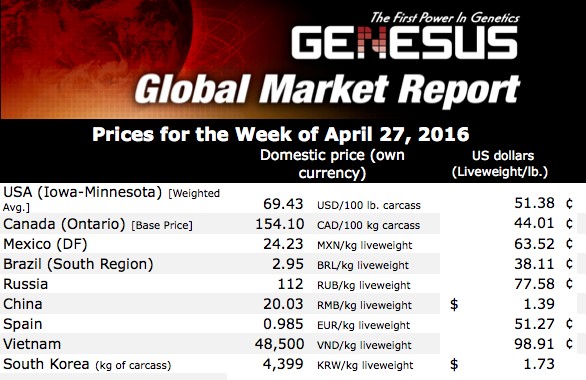 Although demand for pork, in the last week has been great due export to countries other than EU, which will allow greater numbers of pigs going to market, over the last six weeks there has not been great changes on price in the Spanish market, which has been a big concern for producers. The price has been the lowest for the EU since 2013. However price has increased slightly (0.025 €). Current price is 0.985 € / kg liveweight. But still below the barrier of 1 euro so far this year, down from previous years. The average of the year is 0.95 € / kg liveweight. 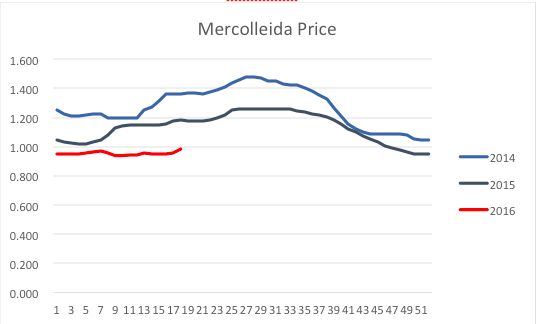 We carry all this quarter with more supply of animals and with higher slaughter weights, we are about 2 kilos heavier than a year ago. Both producers and slaughterhouses are seeking higher weights to dilute fixed costs and reduce their losses Germany remains the largest producer of pork in the EU, because of higher weights and more imports live animals, while Spain is the largest producer of pigs in the EU. Spain has the most pigs produced and it has the lowest prices. Since January, the whole EU is suffering with a huge supply of pork and lower prices, and low demand in the domestic market. Fortunately we had good news from China this week demanding more pork and byproducts. Germany, which had fairly balanced the supply and demand, has started also to sell to China. This is what is helping the prices gradually go up. Just keep in mind that we are talking about the trade flow of the four largest pork producers worldwide. These exports have made that Europe, according to a report by the European Commission, has reached the record pork exports to countries other than EU, the first two months of the year, with 579,473 tons. This is great news, considering that this absolute record has been no exports to Russia. China imported 74.7% more than in 2015 (102,000 tons), Japan has been increased in 25.9% (58,536 ton.), Hong Kong 35% more (52,697 ton.), Philippines 30.8% (37 841 ton.), United States (20%), etc. Only it has a negative balance with South Korea -37%. The loss of exports to the Russian market has been largely offset by increasing these in Asia, China, Japan and South Korea. Exports to these three countries will be responsible for the EU to become again the world’s leading exporter of pork in this year 2016. This increase in exports to the Chinese market, with its strong demand, China is getting a big bite from the intra-Community pork market. This is leaving some gaps within the EU, which it will be cover it by not-approved-for-export packing plants. The logical consequence of this is that the price could go up looking for some leveling, despite the augmented production. On this way, we could say that last January, Spain has exported 21% more than last year in the same period, pork, offal and processed combined. Which represented a record in January, with a total of 160,000 tons in one month. These export expectations will be increased in the medium term, thanks to the opening of the Mexican market to Spanish pork. They have approved a dozen Spanish packing plants so far. On the other hand this week when the price of pork has gained some ground, a good portion of frozen pork has begun to hit the market (60,000 of the 90,000 tons that were storage throughout the EU). ITALIAN MARKET Spain and its price has been rising gradually while in the Italian market it has not been the same. After sharp falls two weeks ago, the industry did not reach any agreement between packing plants and producers producing an even deeper fall on prices. Last week the price has continued to decline but in a more slightly way. At this time the price for a 160/176 kg hog liveweight, is around 1.199 € / kg compared with 1.262 euro/kg. On the other hand, Italy is keeping most of its small pigs. There is a high demand for this category of pigs and buyers are ready to pay higher prices. PORTUGUESE MARKET Gradually the price of pork has raised in Portugal in the last half of April. Has gone up from 1.21 euro to 1.23 € / kg carcass. This has made the pork market gain some enthusiasm, reflected on increased of pigs’ volume to the market, and as a consequence, slaughter weights have going down slightly. Although this increase is typical for this time of year, it is expected to continue raising the price in the weeks to come.
Print Newsletter 🖨
Share this...