This past week we were in Russia.  Interesting time for sure.  The Russia industry protected by limited pork imports is having a good run.  Prices are around 110 rubles a kilogram currently or 70¢ USD liveweight a lb.  Profit range $40 to to 70 USD per head.

Profits are leading to increased production with several new sow units being built.

In Russia multi-site production has fallen out of disfavor.  Almost all if not all new sow units are 2,500-3,000 sow mono farrow to finish facilities.

There are no contracted facilities in Russia that we are aware of.  All facilities and swine inventory are owned by a specific owner.  This takes significant capital, with land, buildings and inventory all need financing.  By the time the first pig goes to market around $10,000 per sow is invested in land, buildings, infrastructure and swine inventory.  Every 2,500 sows $25 million USD is daunting when normal interest rates are 14-16% and loans are eight year term usually.  Some producers are able to get government funded interest rate rebates up to 10-12%.  Having good government relations and related capital access are paramount to grow in swine production.

The reason multi-site fell out of favor,  Russian multi-site system failed in disease control.  Mono site farrow to finish is less expensive to build while transportation is less expensive and easier logistically.  Also less sales with mono for bio-security and security management. The harvest is underway and in our travels all we talked too were satisfied with wheat-barley yields.  Corn and soybeans have not been harvested.  Soybeans looked good for what we could see.  Corn wasn’t nearly as good as U.S fields.

Russia has announced the continuation of sanctions preventing European Union and North America Pork until at least end of 2017.  No live hogs are allowed from the EU.  Most of Pork imports to Russia are coming from Brazil as frozen product.

Currently Live Swine Genetics can be imported to Russia from countries that include Norway, Switzerland, Brazil and Canada.  EU countries and the USDA are banned.

Russia’s government stated goal is self-sufficiency in pork production.  They are getting closer by all indications.  The wildcard in self-sufficiency capacity is per capita consumption.  Russia’s per capita pork consumption is half of EU, 20 kilos vs. 40 kilos.  We expect that if Russia consumers have more disposable income they would purchase at levels similar to Europe.  The challenge is a soft economy in Russia with little growth in the average consumers increase.  Over time we would not be surprised if Pork consumption per capita jumps pushing up the tonnage of pork needed for self-sufficiency.

Large packer-producers in Russia see the opportunity to sell pork to China.  Currently the hog drop is going to China but most other cuts priced in Russia are higher than the EU and North America competitors.  All the large Russian producers have there own packing plant.  There is a real push to improve taste and flavor for their individual pork brands.  Indeed Genesus has shipped several hundred of Genesus Durocs to Russia over the last few months as the demand for better tasting pork produced with a competitive cost of production is becoming a real market driver.  From our perspective the rapid implementation of genetics to improve taste-flavor is at light speed.  The Russian industry had demanded taste-flavor is the demand driver for its industry.  It is gratifying for Genesus as we spent eighteen years developing better tasting pork with a competitive cost of production.  Eighteen year overnight sensation. 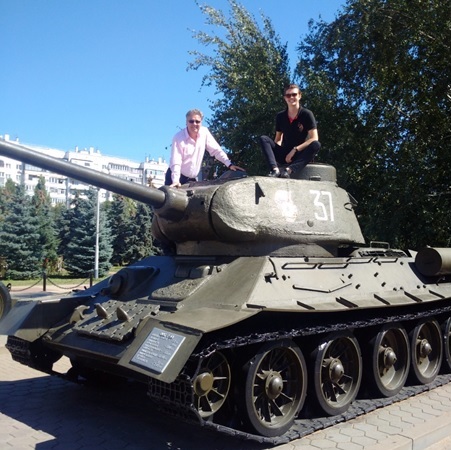 Jim Long and Spencer Long at the Battle of Kursk Museum