In the first part of this series, we discussed the economic impacts of preweaning mortality (PWM), and in the second part the various causes of PWM.

Various predisposing causes of PWM and their complex interactions are depicted in Figure 1. These factors can be broadly classified into (a) Sow factors (b) Piglet factors and (c) Environmental factors. To reduce PWM all these factors need to be addressed simultaneously and in an optimal way. In this third and final part of this series we will be discussing the various genetic selection strategies that Genesus has adopted to address the sow and piglet factors that causes PWM. 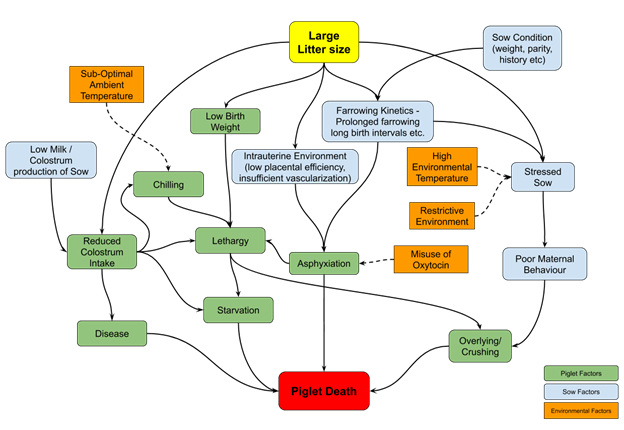 Over the past few decades, genetic selection for sow prolificacy has resulted in significant improvement in litter size at birth. As this is an important component in improving profitability of pig production, litter size at birth is likely to continue as an important breeding goal trait in most breeding programs. Even though increasing litter size improves sow production efficiency as a whole, it can also have unfavourable effects. Litter size or a total number of piglets born have an unfavourable genetic correlation with preweaning piglet survival and vitality, and hence selection for larger litter size will have a negative impact on pre-weaning mortality.

To reduce PWM along with increasing litter size at birth we need to adjust the selection criteria to include traits related to neonatal survival within the selection index. At Genesus we are implementing a new dam line index aimed at increasing the overall sow profitability. As part of this a number of new traits have been added to the maternal selection index. Based on the effect on PWM these new traits can be broadly classified into four groups.

1. Traits that are aimed at decreasing PWM:

This group includes traits that can directly decrease PWM. The traits included in this group are:

a. Still born count, survival in first 24 hours, and survival from 24 hours to weaning: For all maternal litters we record the number of stillborn piglets born, number of piglets that survived in the first 24 hours of birth, and the number that survived from 24 hours to weaning separately, and use them in the selection process. This will decrease the PWM directly by decreasing the death during these periods, and indirectly by increasing the sow’s ability to produce colostrum / milk, which is major factor that determines the piglet survival in the first 24 to 48 hours.

2. Traits that are aimed at improving other economic factors but decrease PWM by an indirect effect.

This group includes traits that are used to select pigs for other economically important reproductive traits, but in this process will decrease PWM indirectly. The traits included are:

a. Total weaning weight of the litter. At Genesus we weigh all the piglets at weaning in all maternal genetic nucleus herds. Selection on this trait, accompanied by selection against mortality between 24 hours of birth and for higher weaning counts and weights will decrease the PWM and increase the quality of weaned piglets. This will also help to increase the milking and mothering ability of the sow. Improving the milking and mothering ability can indirectly decrease the PWM due to crushing and starvation.

c. Sow body condition at farrowing and weaning. All sows in our maternal genetic nucleus herds are weighed and scanned (for back fat and loin depth) just before farrowing and on the day of weaning. The data from this biological change is used in the selection index. This, along with lactation feed intake aids in decreasing the PWM indirectly, by increasing milk yield, improving sow body condition, changing the farrowing kinetics (length), and decreasing stress on the sow.

3. Traits that are aimed at improving other economic factors but has an unfavorable effect on PWM.

4. Traits that are aimed at improving other economic factors but have no effect on PWM.

These are other economically important traits but have no impact on PWM. Some examples are age at puberty, wean to service interval, post-weaning growth traits, etc.

All these traits discussed above in group 1 and 2 will either directly or indirectly help to decrease PWM, by addressing almost all the sow and piglet factors represented in figure 1. At Genesus our objective is to select for increased sow profitability through a balanced selection approach.