According to the formulation for genetic gain over time (Gt) = irσa/t, four factors determine the extent of genetic progress that can be achieved;

The intensity of selection refers to the degree of using superior animals as parents of the next generation based on some selection index values. Theoretically, the lower the proportion of selected animals, indicating higher selection intensity, the larger the genetic gain expected per year. Typically, in pig breeding program, the goal is to select the top 5-10% of males with high genetic potential to produce progenies with commercially desirable qualities and to continually replace those males with progeny with higher genetic potential (Robinson and Buhr. Theriogenology 63 (2005) 668–678, doi: 10.1016/j.theriogenology.2004.09.040).

To achieve the target of selection intensity given a fixed number of boars to be selected means that many more males are required to complete the performance testing program.

Figure 1 below shows the expected average response in index value when sires are selected based on sire line index at various degrees of intensity over time in a nucleus setting. The expected response was computed as the differences in mean index value of the selected group and the mean index value of the base population. Over a five-year period, the genetic trend when the top 1% of boars are consistently selected and used in each year shows a greater response to selection than when 10% of the top boars were selected.

This highlights a greater opportunity for faster genetic improvement in the population due to higher selection intensity, that is, smaller proportion of selected males. In fact, the more offspring that results from a selected boar with superior genetic merit, the faster the population average for all index traits improves. Therefore, the breeding goal of a pig improvement program should aim at identifying and selecting superior boars and using same to replace the older sires as frequently as possible to maximise genetic progress. As a leading pig genetic company, Genesus applies a rigorous approach in the identification and selection of superior replacement boars based on a balance in performance traits between sire and dam lines and having the attributes that customers want to be transmitted to their herds in both domestic and foreign markets. 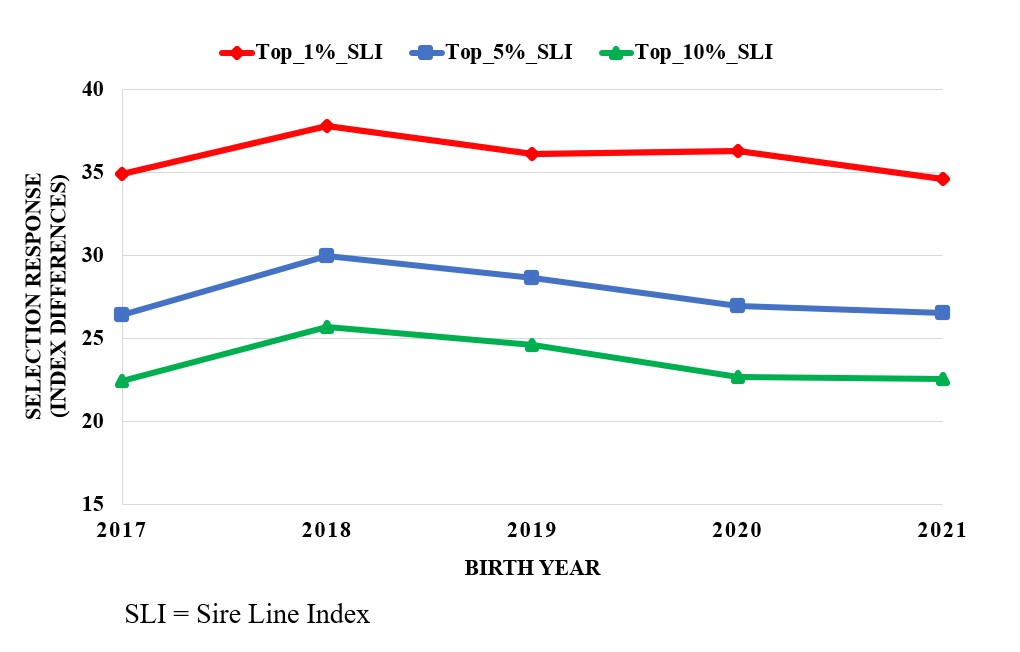